The Occupational Safety and Health Department of the Ministry of Social Protection today handed over its report on working conditions at City Hall. The report was handed over to Town Clerk, Royston King by labour officers Roydon Croal and Latoya John at the Ministry’s Brickdam office.

The inspections were carried out following reports that surfaced in the press about employees of the Mayor and City Hall working in adverse conditions. Chief Labour Officer Charles Ogle noted that, “the Ministry of Labour thought it fit that we should carry out an inspection to ensure that the workers are working under favourable conditions.” 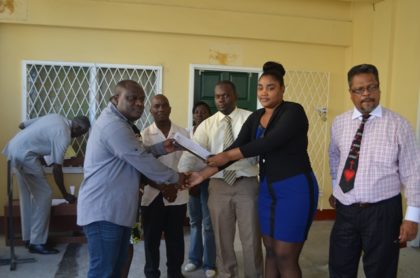 The Town Clerk said that he welcomed the report. “We will study the report, will look at the recommendations and whatever the report says, we will follow the guidance of this report,” King stated.

Additionally, King said that the report will be handed over to the council members who he said will see the need to formulate additional policies in favour of their workers.

According to Ogle, recommendations will be submitted to the council on July 29, 2016 followed by an additional inspection by Occupational Safety and Health officers.