Reports of child labour, exploitation on coconut plantations to be investigated – Minister Hamilton

Minister of Labour, Hon. Joseph Hamilton has said a comprehensive investigation will be launched into reports of child labour and exploitation on coconut plantations in the Pomeroon, Region Two.

Minister Hamilton was at the time engaging the Region’s Regional Democratic Council (RDC) during an outreach, where he announced that a special team including the Chief Labour Officer and Director of Health and Safety, would lead the investigations and examine the veracity of the complaints along the Pomeroon River. 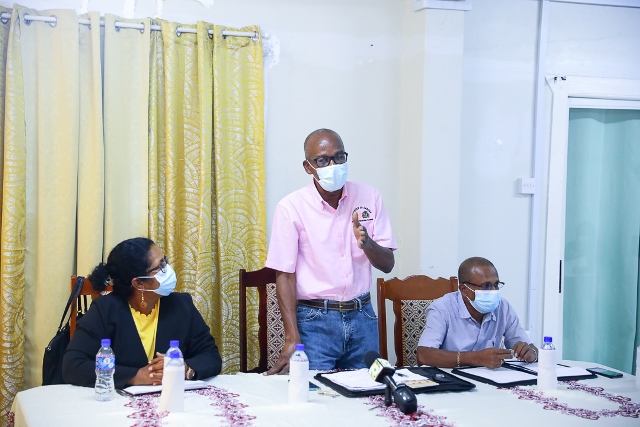 Regional officials at the meeting

“Historically, you have families I am told, who are on plantations where children are also involved and so the whole issue of child labour, it must be considered. This is a serious matter and it is a matter that we are addressing…an investigation will be launched shortly,” he said.

“We have to examine what is happening in the Pomeroon area, more specifically on coconut plantations, whether people are being paid the minimum wage and whether people are working in conditions that pass the test of what conditions workers should work under… and if employees are getting overtime and annual leave,” he said.

Minister Hamilton said he anticipates that investigations will wrap up by the end of December.

In order to address these issues holistically, Labour and Occupational Safety and Health Officers must be placed in every region.

For Region Two, he announced one Officer will be stationed in the Pomeroon area and another on the Essequibo Coast. They will be recruited from within the Region, and will be trained by the Ministry.

Minister Hamilton also used the opportunity to outline the fundamental objectives of his Ministry, which are capacity building, human development and the protection of the rights of workers.