Research conducted by officers of the Guyana Livestock Development Authority (GLDA) into the Incidence of Emergence on insect pests of rice in Guyana has yielded significant results.

The research paper was composed by Entomologists Viviane Baharally, Alana Peters and Jenarine Hardat and presented by Baharally on the first day of the Agricultural Research Conference being held at the Guyana School of Agriculture. An excerpt from their presentation alluded to the fact that rice productivity, as robust as it is, is still limited by the harmful effects of insect pests. 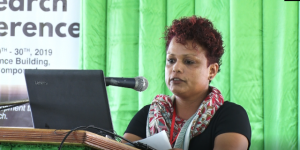 Research Officer from the Guyana Rice Development Board, Viviane Baharally.

Just earlier this year, rice farmers across Regions 2 and 6 suffered losses from paddy bug infestation. The paper goes on to explain that while the contributing factor of this loss has been traced to paddy-bugs, there needs to be more focus on the monitoring of the effects of other pests such as leaf miner, water weevil and caterpillars.

Further to that, surveys conducted over the past two years have revealed the planthopper, leaf folder and grasshoppers are occurring in large numbers across the rice-growing regions. The data collected in 2018 showed an increase in the presence of plant hopper in regions 2, 3, 4, 5 and 6.

The grasshopper damages the plant by shredding the leaf from the tip and squeezes the grain during the milk stage to get its content. Data collected in Burma, Mahaicony revealed a hundred-fold increase in numbers of the planthopper over two seasons, the second crop of 2018 and the first crop of 2019.

In Regions 4 and 6, there was the presence of Leaf Folder; however, it was not continuous. Meanwhile, grasshoppers showed a presence in all the regions in 2018. Moving forward, extensive monitoring is recommended as a vital component of the Integrated Pest Management protocols utilized to keep the threat of these pests under control.

The event concluded today and featured several research papers on a variety of emerging and prevailing issues in the Agricultural Sector.