Several hinterland communities in the Pomeroon River, Region Two met with the Minister of Indigenous Peoples’ Affairs, Sydney Allicock and his team when they visited on July 20-21.

The visit to Akawini, St. Monica and Wakapoa, predominantly Amerindian communities, was to accommodate meetings to give the Indigenous peoples the platform to discuss their issues with the Ministerial team. Residents from each village gave the visiting team a warm welcome.

Minister Allicock believes that every individual must have the right to make his or her decisions. “This will help us to be able to work with you, be able to listen to you, this is not a one-sided thing that we are going to come and fix everything. We are fixing anything that you decide upon together,” the Minister explained.

Minister Allicock said that many times officials sit behind their desks and think they know the needs of the people. Allicock told the residents that he is aware that he cannot work in isolation, adding that it is important for him to get acquainted with what’s going on in the villages.

Minister Allicock cited the need for a better working relationship among the communities, the Regional Democratic Council (RDC) and Central Government. “You can make a difference, what we need is to get organised. You have a regional body that is willing to help, but if you don’t ask, none of us will know,” the Minister stressed.

Chairman of the National Toshaos Council, Joel Fredericks addressing the residents of Akawini

Meanwhile, Fredericks called upon residents to have a vision for the development of their community. He expressed that working together is the only way development can be achieved.

Regional Chairman Ramdatt told the residents that they are in good hands as the Ministry of Indigenous Peoples’ Affairs is working assiduously for the development of indigenous communities. The Ministry, Ramdatt added, “sets a good example of integrating the region in the development process.” 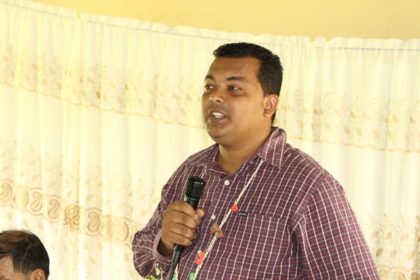 Region Two chairman, Devanand Ramdatt as he addresses the residents of Akawini

Ramdatt also echoed the call for unity for the development of the villages while explaining the importance of working together. “We have 12 councillors from the People’s Progressive Party Civic (PPP/C) and 5 from the Coalition Government but we were never divided, never divided on any development matter,” Ramdatt stated.

Residents of Akawini, which has a population of about 1200 people, raised the issue of senior citizens not receiving their old age pension in a timely manner. According to residents, it has become a burden since many depend on the money to survive. The matter was addressed by the Regional Chairman who assured residents that the RDC will find ways to ensure that officers visit the village and pay the pensions on time.

Barbara France, a resident and teacher of Akawini raised concerns about transportation for students to get to and from school. “I am a widow, and I have children going to Charity Secondary School, and I would also like to… have a secondary department here in Akawini,” France said.

The Regional Chairman responded by explaining that, “we would have to have our technical people do a feasibility study because we have also seen cases of schools being developed, but there were difficulties with the sustainable management.”

Wakapoa, consisting of over 2000 residents, is one of the fastest growing Indigenous villages. Its residents called for the development of the community’s roads.

The Minister’s Advisor, Williams explained to the residents that government is currently working to have the construction of three bridges and a road in the community included in the 2017 National Budget.

Roxanne Williams, a Wakapoa resident said, “The disabled people in my community are finding it difficult to travel and they are not getting assistance, and I see this as a big issue in my community.”

Wakapao resident, Roxanne Williams raising an issue during the meeting with Minister of Indigenous Peoples’ Affairs, Sydney Allicock and team

Minister Allicock assured the resident that he will be looking into the matter to make available a boat which can transport those who are differently-abled.

Wakapao is an Arawak village, and the Minister said that there will be continued efforts for the revival of their language.

St. Monica, which also has a population of over 2000 residents called upon government to provide trained teachers and for the primary school’s sanitary block and fence be built.

Requests were also made for the extension of the school, and the health post and for a solar panel for the latter.

All concerns and needs were taken into consideration by Minister Allicock who explained that their proposals will be submitted for entry into 2017 National Budget. The Minister pointed that there being 212 indigenous communities, not all their submissions would be a part of the Indigenous Peoples’ Affairs budget. However, the Minister noted that due to the overlapping responsibilities by other Ministries, all communities’ concerns would be addressed.

Additionally, Minister Allicock urged the toshaos from each village, to be more engaged with the residents. They were advised that when problems arise, to find ways of contacting the relevant officials to assist in resolving them.