Some 91 percent of the population is accessing new and improved services as a result of a revitalised local governance system.

This was highlighted by Minister of Communities, Hon. Ronald Bulkan at the opening of the ministry’s annual senior staff conference on Tuesday.

Minister Bulkan described the holding of two consecutive local government elections after more than 20 years as a historic move by the Coalition Government. He added that it represented the transferal of power to its rightful place, in the hands of the people and their duly elected representatives.

The move has resulted in better access to services, particularly housing and water. 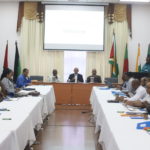 But the minister noted that it was not without challenges given the pushback from some in leadership positions in the municipalities and communities.

“Neighbourhoods and villages are enjoying the dividends of local democracy through ever-improving services; I may add however that progress has not been uniform given the reluctance of the principal political opposition to embrace or even to accept this model of governance,” he explained.

According to Minister Bulkan, local governance is now positioned to support the growth of national development following crucial investments by the administration over the last four years.

The staff conference reviews the ministry’s previous year and sets the strategic plan for the one ahead.

This year’s theme is ‘Advancing local government and sustainable community development through enhanced collaboration for effective service delivery in a green economy.’