(July 4, 2017) Nearly 19 years after becoming defunct, the Transport and Harbours Advisory Council, under the Ministry of Public Infrastructure, was today (July 4, 2017) resuscitated, with Minister within the Ministry, Annette Ferguson, calling on the newly inducted council to raise the level of standard within the T&HD. 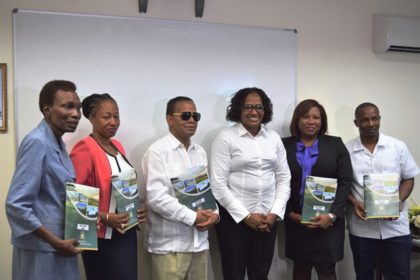 Minister within the Ministry of Public Infrastructure, Hon. Annette Ferguson, with some of the newly inducted members of the Transport and Harbours Advisory Council. Left to right: Ms. Sandra Jones; Ms. Marclene Merchant.

In her charge to the members, Minister Ferguson noted the importance of riverine transport for economic, social, and education purposes.

“Given the geography of Guyana and the population distribution across the country, riverine transport services will still be needed for the foreseeable future. However, I believe there is much improvement that is necessary and there is need to modernise the services to improve people’s travelling experience,” Minister Ferguson stated.

When further questioned on the reasoning behind resuscitating the council after nearly two decades, Minister Ferguson emphasised that the council was resuscitated due to the need for a more comprehensive approach to the management of the Transport and Harbours Department. She also noted that the resuscitation played into the Government’s mandate of transparency and accountability and that the Act of the T&HD makes provision for an advisory body.

“I firmly believe that rather than everything coming to the Ministers, the advisory council must be able to function independently, [and] provide me with the necessary direction of the T&HD. The T&HD really needs the assistance and, as the Minister, I cannot do it alone…so once you have the competent people on the Advisory Council, they will be in the position to give us the necessary guidance and direction so as to make informed policies to charter this particular organisation forward,” Minister Ferguson said.

She further challenged the new council to address a number of areas, including the staffing and administration of the T&HD; the enhancement of the operation and services offered; and policies and regulations aimed at improving efficiency in the functioning of T&HD.

Minister Ferguson also noted some areas of improvement she would like to Council to address, including the modernisation of the T&HD, enhancement of safety procedures, and reduction of travel times on T&HD vessels.

Meanwhile, the Chairman, Mr. Blackman, thanked the Ministers of the Ministry of Public Infrastructure for recognising the need for the resuscitation of the Transport Advisory Council. Noting that his colleagues on the council were competent, he committed himself to executing his charged mandate to the best of his abilities.

“I will do my best to ensure that there are ample provisions and efficiency in the newly resuscitated Transport Advisory Council,” Mr. Blackman said.