The first meeting of the Guyana Elections Commission (GECOM) today to review the report of Chief Elections Officer (CEO) Keith Lowenfield, saw some disagreement among the commissioners on the whether to discuss the Observation Reports.

The seven-member commission met today to get down to the review of the detailed report by the CEO which was officially handed over on Saturday. 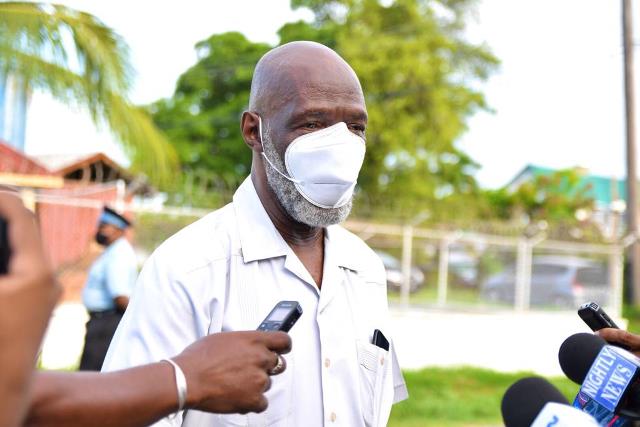 GECOM Commissioner Vincent Alexander speaking to members of the media

However, according to Commissioner Vincent Alexander, there were no in-depth discussions as there was “some back and forth on whether the Observation Reports should be considered.”

The Observation Reports are a critical aspect of the CEO’s report, which detailed that the March 2, 2020, General and Regional elections were not credible.

The gazetted National Recount Order which guides the national recount has as its objective determining the credibility of the March 2 polls. The Order itself says that the Observation Reports must be used for agents to record all instances of irregularities unearthed during the just concluded physical recount of those ballots.

“There are those who attempted to contend that we needed to get to the “chase” and simply give effect to the tabulation,” Commissioner Alexander told journalists outside of GECOM.

Alexander noted that while the Observation Reports were eventually taken on board and the discussion began, it would have been nonsensical for GECOM to agree to the reports in its Order and now refuse to give attention to them.

Alexander said he sought answers on several issues, including whether the commission had garnered evidence of dead and migrated voters.

It was related that the Secretariat had provided the evidence accordingly to the commission. Alexander said the verification showed that there were indeed persons who migrated as cited by the Chief Immigration Officer. Similarly, there is verification to show that deceased persons had votes were cast in their names.

The information in possession of the commission at the moment shows 45 instances of dead persons voting and over 500 for migrated voters.

The Commissioner said there are still issues with all of the irregularities, especially with the missing documents of the 41 ballot boxes on the East Coast of Demerara.

“At this time, I’m still of the view that there are serious questions about the credibility given the irregularities that have been verified.”

Alexander said a final pronouncement by the commission could be made by the end of the week.