Reviving an indigenous culture in Mabaruma

A Mabaruma Region One (Barima-Waini) resident is on the path to restoring what she describes as the “dying culture” in many indigenous villages, while at the same time, helping women to earn an income to support their families.

Leonie Willis, an indigenous woman from the Warrau and Arawak tribes, said for years she had noticed a “moving away” from the cultural practices in her region but found that her hands were tied. Willis vowed that should she be placed in an influential position, she would make good on that opportunity to reach out to the communities. 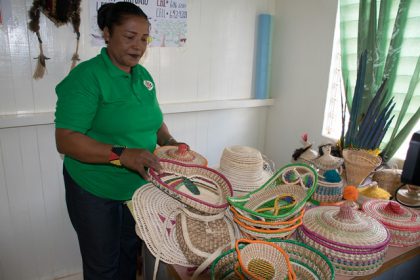 CDO, Leonie Willis with some of the work done by indigenous women in Region one.

That dream was realised when in January of this year, she was appointed as a Community Development Officer (CDO) by the Ministry of Indigenous Peoples’ Affairs. “I really appreciate my culture. One of my visions was to have a chance to really reach out to my indigenous brothers and sisters and I have been given that opportunity from January of this year,” Willis told the Department of Public Information (DPI) in a recent interview.

Willis has been taking her role as a CDO very seriously a since it offers her scope to access the communities in Region One and the opportunity to “bring back the indigenous culture alive”.

She has been very active in the various communities and has seen the talented work of the women in the villages.  Willis explained that while the region has over 30 communities, she was only able to visit 14 because of transportation constraints.

“I know that there are Indigenous people residing all around here, even places that I’m sure a lot of officers don’t even know.”

Willis spoke specifically to the languishing indigenous languages. According to her, persons are moving away from the language and even the older folk are moving on without passing on what they know to the younger generation.

Willis has been using the talents of especially the women in the communities, to both help restore the culture and give them opportunities to earn a living. The women, she explained, have been making some beautiful craft, promoting the local culture.

“My promise to them is that I will get the material and give it to them. I told them that once they make the craft and its suitable for the market I will buy from them.” The CDO is also seeking other markets for the products.”

Willis has been targeting especially the women because it is proven that many are actually the breadwinners of their homes; doing everything possible to make ends meet.

“First you would find the men going out fishing, now you find that the women are going out tying their hooks. “So, I decide to work with the women because they are more eager to learn,” she said.