The coming oil and gas industry will demand more from the Ministry of Finance’s internal auditors. As such, Finance Minister, Hon Winston Jordan on Friday charged the officials to be ready to take on the challenge.

The minister delivered a brief charge to the ministry’s Central Internal Audit Unit, during the holding of its second annual staff retreat at the Watooka House, Linden.

In a matter of days, Guyana, through US oil giant ExxonMobil, will begin production, eventually leading to a significant increase in government revenues. Minister Jordan said the role of internal auditors would be critical to the process.

“Auditors must eschew threats, intimidation and bribery, aiming to perform their duties without fear or favour, affection or ill will,” he charged.

The finance minister said internal audit reform was necessary and would mean a change of culture. According to Min. Jordan, the team must take the required steps to ensure that internal auditing remains an efficient tool to sustain sound public financial management in Guyana.

The government is on an economic diversification path to avoid the “Dutch disease” and resource curse in which many oil-producing countries find themselves. At the same time, it is edging closer to the establishment of a Sovereign Wealth Fund.

The Fund will ensure that the oil resources are managed efficiently.

“President David Granger has also earmarked 2020-2029 as the decade of development, which will entail significant investment in public sector projects, to expand core economic sectors, focus on value-added products and invest heavily in infrastructure development. These developments will increase the roles and responsibilities of the internal audit unit,” Minister Jordan said.

He noted that they were already transitioning to the Integrated Financial Management International System, where all users were expected to adhere to standard rules and procedures to facilitate better monitoring and reduce the risk of misuse of public funds. 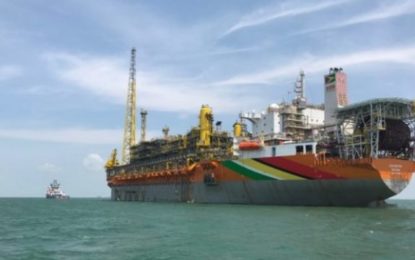 Inspections of oil and gas vessels on the rise

Author Details Shaquille Bourne Author email shaquille.bourne@dpi.gov.gy DPI, Guyana, Tuesday, January 21, 2020 With the advent of the oil and gas sector, the Maritime Administration is exercising its regulatory duties over vessels operating within a new industry; since there has been an increase... END_OF_DOCUMENT_TOKEN_TO_BE_REPLACED

Desilting of drains in Alexander Village...

No price increase for land, housing even with...