The 40-year-old won the title in 2014 and came close on several other occasions.

Seeraj says this year’s song is a simple one which highlights the notion that the way to a man’s heart is through his stomach. In his case, roti and dhal does the trick. 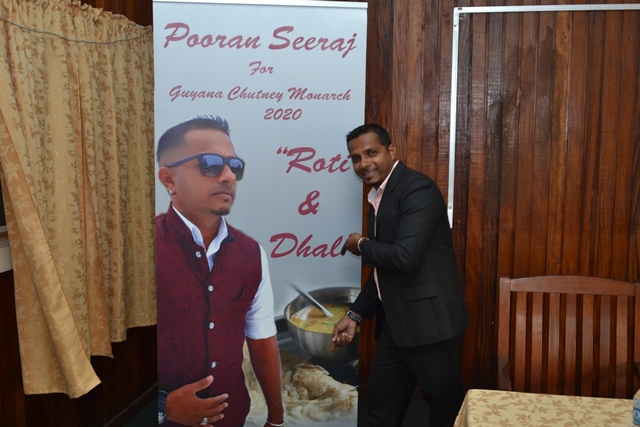 Chutney Artiste Pooran Seeraj at the launch of his new video and entry for the 2020 Chutney competition.

“Most Indian’s homes and even other cultures like these dishes. Since as a young boy that was my favourite dish and it started when my mother prepared lovely roti and dhal. Then I met this girl and think she got me trapped with this roti and dhal issue,” he explained to DPI.

Seeraj says the video shows his funny side and ‘out of the box’ thinking and he is confident about his chances of topping the 16 other contestants.

He thanked his sponsor, Triple C Consultancy for being part of his journey, noting that sponsorship plays a significant role in getting artistes’ material out into the public sphere

Rahul Chintamanie, the representative of Triple C Consultancy, told DPI that they were “proud to be a part of Chutney Monarch 2020.”

“We are supportive of this Roti and Dhal by our very own Pooran Seeraj. Triple C Consultancy Always recognise and support local talent especially in the rural area,” he said.

Meanwhile, Seeraj called for more cooperation among local chutney artistes to push the development of the art form in Guyana. He noted that this could only be achieved through corporate partnerships and the implementation of copyright laws.

“In Guyana, Chutney gets hyped before and during Mash, and after Mash, you get mash up; you do not hear local songs even the shows do not promote. I have produced songs over the years and yet I have not a dime from it. If you want to produce a video it cost money and so we need some kind of protection through copyright laws,” he stated.

The semifinals of the chutney competition is set for February 9 with the finals tentatively scheduled for February 23.