Ministry of Foreign Affairs, July 28, 2017 – Minister of Foreign Affairs Carl Greenidge was today paid a courtesy call by Suriname’s Vice Director at the Ministry of Sport and Youth Affairs Kenneth Jaliens and The Netherlands Royal Dutch Football Association (KNVB) Instructor Andre Simmelink. They spent the last week with 26 football coaches from around Guyana developing their skills both on and off the field. 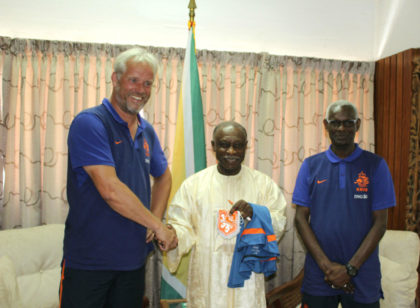 The Government through the National Sports Commission (NSC) is benefiting from the training provided by the Government of the Kingdom of The Netherlands through the WorldCoaches and International Social Programme of the KNVB. The week-long training programme concluded today.

Minister Greenidge noted that Jaliens and Simmelink’s visit was rather timely as the country was in need of assistance in sports, especially in areas such as football.

“The lack of equipment needs to be urgently addressed because of the number of young Guyanese is an issue here. Systems must be in place to raise morale and provide opportunities to develop their skills at sports,” Minister Greenidge said.

During the week-long training programme, Simmelink found while the coaches were open to learning new methods, he understood the challenges they faced with the lack of equipment. “In this situation, it is better to play smaller groups to facilitate more complex playing and decision-making in the field,” he explained.

Simmelink shared that while the training focused on developing coaching methods on the field, yesterday the coaches also participated in an exercise to demonstrate their ability to impact players beyond football. “You are more than a coach,” Simmelink said. “You can influence players by addressing problems and social issues that they have.”

Diplomatic relations between the Cooperative Republic of Guyana and The Kingdom of the Netherlands were established on 15 May 1970. 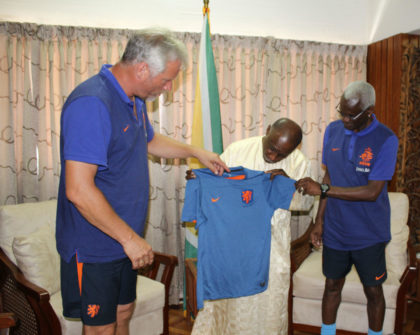