Sports gear and trophies donated by the Ministry of Social Protection were given to the Ruimveldt inter-area youth community football group in celebration of their 5th Anniversary. The items were handed over to the group by Sophia White on behalf of the Ministry in the presence of the members of the group.

The group which was initially named ‘Church yard football’ was renamed, ‘The boys’ after they experienced challenges in terms of finding a place for practice sessions. The team’s Director, Donna Hollingsworth-Callender has paid a lot of attention to the group with the hope of improving their performance. “There are many times that I wanted to give up, but somebody always comes to encourage me or just say something, and I will come back,” Hollingsworth-Callender.

The group meets regularly at the St. Pius football field. The group accommodates boys within the age range of eight to 25 years, but is open to anyone with the passion for playing football. Boys from all areas within the environs of Ruimveldt/La Penitence make up the membership of this youth community group hence the name ‘inter-area’. 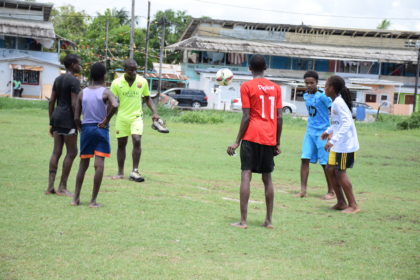 Sophia White, the councillor for the constituency in which this group is based, applauded Hollingsworth-Callender for her efforts. “I always see Ms. Hollingsworth out here trying with them, not only is she a team director in terms of her football, but she is also a councillor and a mother and I admire her…”

White, who is also a teacher, continues to encourage the boys who attend the school at which she teaches and the literacy group she spearheads, to stay with the group since it would eventually keep them out of trouble.

The boys themselves find joy in what they do and they thanked Hollingsworth-Callender for the continuous sacrifices she has made for them.

Minister of Social Protection Volda Lawrence who could not be at the handing over ceremony has played an active and vital role in the group’s early development even before she ascended to ministerial office. She continues to pledge her support to this youth community programme.

As part of the fifth anniversary celebrations, a series of games will be held at the St. Pius football ground. The trophies and prizes will be given to the participants of these matches relative to its end results. 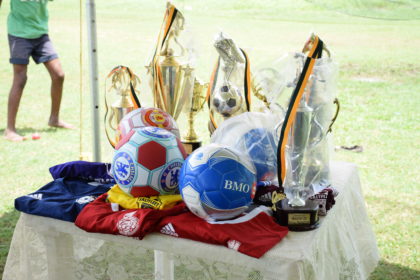 Some of the gear donated by the Ministry of Social Protection