The Rupununi district in Region Nine has been identified as the new future of the country as it possesses enormous potential for agriculture and other ventures. This is the view expressed by Prime Minister Moses Nagamootoo when he met with residents of indigenous community over the weekend.

During a meeting with approximately 100 residents at the Bina Hill Institute, Annai, the Prime Minister encouraged them to develop cottage industries and move into agro processing. 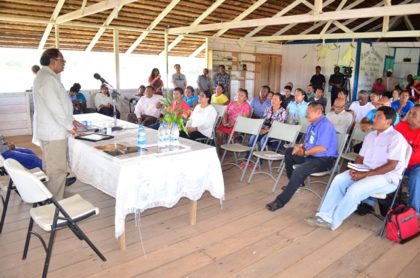 “We are trying to project agro-processing here and already we are tasting peanut butter from Parishara, we are having some other products coming out of the Rupununi, in terms of concentrate, not only in terms of farine and cassava bread, but you have the potential here of producing world class peanuts, cashew nuts that you could can and world class fruits that you could dry. Once it is packaged and put into containers, it could be exported to the world which is now facing a shortage of food,” Prime Minister Nagamootoo explained.

Prime Minister Nagamootoo advised the residents that the Rupununi holds the key for a prosperous future for them and that Government will continue to implement programmes to improve their lives, but they need to get on board the process.

“We just started one year ago, and you yourself can look around and see our communities are changing, the lives of our people are changing, perhaps a little too slow to bring satisfaction to us but we need to walk this path, one step, one day at a time so that we can bring lasting changes,” he said.

Meanwhile, Minister of Indigenous Peoples’ Affairs, Sydney Allicock told the residents that his Ministry has embarked on consultation with the residents of the 212 indigenous communities, to listen to their concerns and determine their needs so that they can be addressed in the Ministry’s 2017 budget. 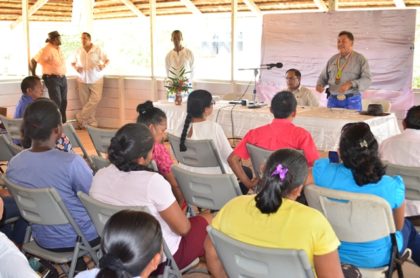 Minister of Indigenous Peoples’ Affairs, Sydney Allicock addressing the residents at the meeting at Bina Hill

Minister Allicock encouraged the residents to organise themselves and work together on proposals for their respective communities’ development. The Minister also stressed the need for the development of sustainable villages.

The Region Nine residents had the opportunity to raise concerns with the officials. Some of these include overcrowding at the Annai Secondary School and dormitories, the need for;  medical equipment at the health centre, trained teachers, solar panels for schools and accommodation for teachers’. 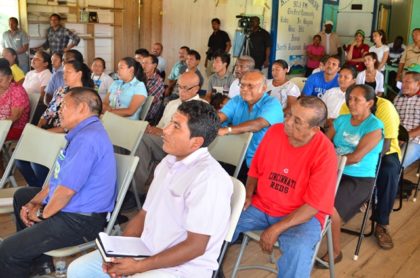 A section of the gathering at the meeting at the Bina Hill Institute, Region Nine

The concerns were noted by the Government team and the Prime Minister committed to following these up with the relevant Ministries and Government Departments.