The long awaited tax exempted overtime for workers from the Bauxite Company of Guyana Incorporated (BCGI) will soon be realised. 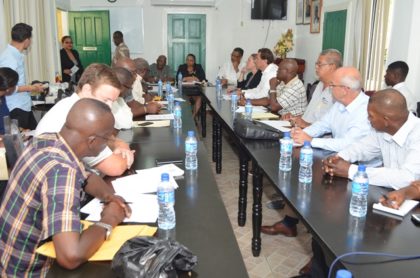 Minister of Social Protection, Volda Lawrence and Minister within the Ministry, Keith Scott engaging officials from the Bauxite Company of Guyana Incorporated (BCGI)

The greatest concern from the workers revealed to the Social Protection Ministry teams on their visit was that of workers not being given the opportunity to have a union of their choice.

Linden Prince, Senior Safety Officer, BCGI responded that management was never approached by employees for union representation. However, the company has committed to provide workers the opportunity to have a union of their choice.

Among other concerns raised over the past several years include workers being compelled to complete tasks without the company having the necessary equipment to do the job, staff working for in excess of five years and receiving no raise in pay, staff reporting sick receiving pay eight hours for a three-day period but upon resumption money is deducted from their salary,  poor ventilation in office areas, and no Occupational Safety and Health representative or committee among several other issues.

In response to the issues raised, BCGI’s management said that the company has no knowledge of workers being compelled to complete tasks without the company having the necessary equipment to do the job.

The company’s management said wages and salary increases are provided annually to all regular employees and contractors; however the Social Protection team advised that the company correct any actions that are detrimental to the occupational health and safety of the workers.

Minister Lawrence in her closing remarks emphasised the need for the company to work together with the government to ensure that both the company and employees are protected under Guyana’s law.