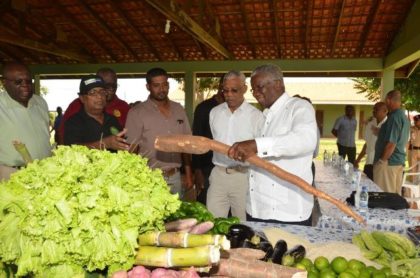 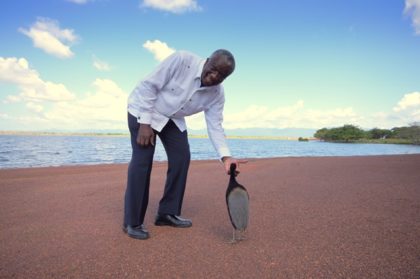 This ‘Warakabra’ captured the attention of Prime Minister Freundel Stuart, during a brief stop at Nappi Village

Prime Minister Stuart said that Guyana is definitely open for business and investments and that the success of the Santa Fe farm can serve as a model for other investors from other parts of the Caribbean and further afield to get on board.

“We have come to see for ourselves because we have a message to take back to Barbados…the project at Santa Fe is as good an example as any to be found of the wisdom of venturing out of Barbados and other parts of the Caribbean and coming here into Guyana and invest. If the Brazilians can do it, if the Chinese can do it…we here in CARICOM can do it as well,” he said. 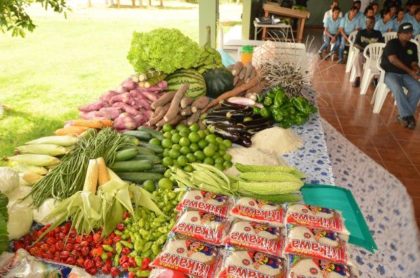 The Barbadian Prime Minister spoke of the close relationship that Guyana and his country have shared over the years. Both countries gained their independence in 1966 and both shared a High Commissioner to London for many years in the person of Sir Lionel Luckhoo.

Meanwhile, President Granger said that Santa Fe represents a reaffirmation of the bond between Guyana and the Caribbean, moreso Barbados. 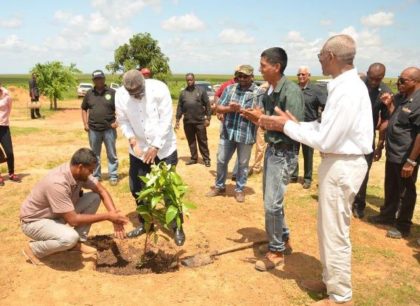 In keeping with Guyana’s green agenda and as an expression of friendship, a tree planting exercise was held at the Santa Fe Mega Farm. In picture- Barbados Prime Minister Freundel Stuart plants an avocado tree while President David Granger and the visiting delegation looks on. President Granger also planted an avacado tree nearby, while Minister of Communities, Mr. Ronald Bulkan planted a ‘mamey’ tree.

He said that Region Nine is bigger and has an eco-tourism product that rivals that of countries like Costa Rica and therefore it must be developed.  However he noted that proper roads and other vital infrastructure and reiterated his Government’s commitment to building the Linden-Lethem road, which will essentially open up the hinterland.

Speaking about Guyana’s tourism potential, President Granger said that Guyana can benefit from the expertise of Barbados, which is known for its world-class tourism product. 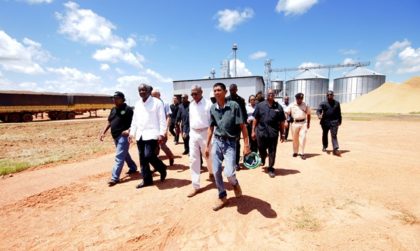 “I want to see entrepreneurs from Barbados combining their product with our product and we are going to be participants of this Caribbean project of developing our countries for our people and our children…the door is open and we are here to show our Caribbean brothers that with our land space, once we have investments and the expertise, we can become as prosperous as any other part of the world,” he said.

Regional Chairman, Mr. Brian Allicock lauded the level of innovation at Santa Fe. He said that every time he visits the farm something new is being developed but urged for some kind of mechanism to be worked out whereby small farmers can benefit from the expertise at Santa Fe.

The Santa Fe farm spans a total of 29,000 acres of arable lands in the North Rupununi. Farm Manager, Persaram Ramdat said that currently 1200 acres of land is under rice cultivation, while another 8,000 acres is being prepared for rice.

The rice lands are supplied with water supplied directly from the Ireng River through an impressive gravity irrigation system. Rice grown at Santa Fe is exported, while ground provision and other cash crops are sold in Lethem. 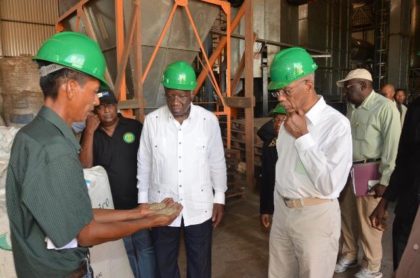 The rice, when harvested, is processed at two huge silos located on the farm itself. This facility was constructed manually; completely without the use of any machines by 30-odd residents.   Cattle, poultry and small ruminants are also being reared at Santa Fe.

Even as Government looks to support the redevelopment of cattle rearing in the Region, after some years of decline, GLDA’s Head, Mr. Nigel Cumberbatch plans are in the pipeline to resuscitate the sector. These include the introduction of new breeds of cattle, the construction of an abattoir and the sourcing of better markets.

He informed that GLDA has a strong presence throughout the Region as a number of veterinarians and livestock assistants are posted in Region Nine to assist farmers and deal with challenges such as disease outbreaks. 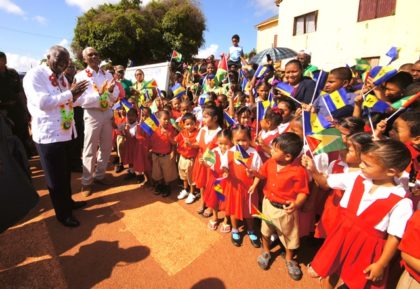 President David Granger, Barbados Prime Minister Freundel Stuart and the visiting delegation received a warm welcome at the Lethem airstrip by school children of Upper Takutu-Upper Essequibo, who were waving the flags of Guyana and Barbados

“We try to ensure that the technology is made available…with our presence here there is that assurance that we will do whatever is necessary… We are having discussions with the Inter-American Development Bank and we are looking with their assistance, to ensuring that slaughter facility is improved… In addition to that we are also looking at the establishment of a model station in the Rupununi, looking not only at livestock, but also crops so that there could be an improvement within the Rupununi,” Mr. Cumberbatch said.

Government remains committed to the development of Rupununi and the Santa Fe Farm represents a model of what is possible with further foreign and local direct investment in the sector, even as opportunities are explored to support small and medium scale farmers.