—As Region ramps up method to fight COVID-19

Director of Regional Health Services, Jevaughn Stephen announced that the process officially began on Friday morning and by 12 noon, 150 persons had been tested.

Stephen said a screening site has been established on the western side of the Berbice River Bridge. Doctors and nurses will check temperatures and, in some cases, for high blood pressure. 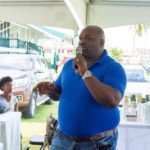 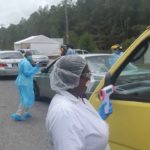 Persons leaving Region Six to enter Region 5 and onwards will be allowed to pass, however, those entering will be screened. Once tested, they will be given a band, and if necessary, sent to the hospital for further evaluation.

“If a person is flagged with a high temperature or a spike in BP, then that person will be given a band and sent to the hospital for treatment or further screening.”

Stephen explained that the giving wrist bands to those persons who have been screened will also ensure the healthcare officials do not repeat the process for those individuals traversing the route often within the day – such as mini bus operators and taxi drivers.

It was highlighted that the Regional Health Services will continue the initiative for as long as is necessary. Screenings are also being conducted at New Amsterdam Hospital and the Mibicuri District Hospital.

Noting the rise in confirmed cases in the country, Stephen appealed to residents to stay at home and practice the guidelines outlined by the Public Health Ministry and the WHO.

Following the announcement, several Berbicians took to social media to express satisfaction with the decision taken by the regional health authorities.