The Ministry of Social Cohesion has donated electronic tablets to secondary school students residing in the Lake Capoey community in Pomeroon-Supenaam.

Monday’s gesture from Minister, the Hon. Dr. George Norton and his team followed a request made during a recent ministerial outreach to the area.

Dr. Norton told the residents that the donation reflects the government’s commitment to improving the lives of all Guyanese especially the youths.

“We as a government will continue to assist and support those on the hinterland as we do for those on the coastland, whether it is education or health …we will deliver on our promises.”

He also assured them that the community’s Grade Six students would also benefit from a similar donation. 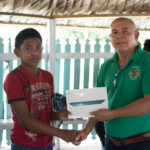 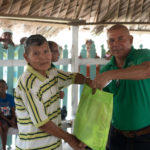 Minister of Social Cohesion Dr. George Norton presents a food hamper to one of the seniors in Capoey 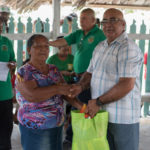 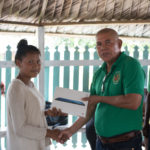 Two students from the Capoey area Tikesha Henry, and Fidel Edwards of Johanna Cecilia and Cotton Field Secondary schools respectively, opined that the tablets would be beneficial in their studies.

“I appreciate this (donation) a lot as it will help me to complete my assignments much easier and faster,” Henry said.

Toshao Ralph Hendricks thanked the minister for honouring his promise and added that Capoey would progress with the continued support of the government.

“We are hardworking people who push for the development of our community, and with your help, it can go a bit further,” he said.