Sebai, a riverine village in the Matarkai sub-district, Region One, is the latest beneficiary of a boat and engine to aid in medical emergencies within the village.

The vessel was handed over to the village Thursday last, by Minister of State, Hon. Dawn Hastings-Williams during a recent outreach to the Matarkai sub-region. 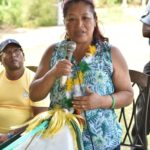 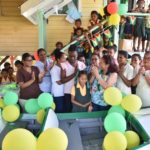 Minister of State, Hon. Dawn Hastings-Williams handing over the boat to the village leaders.

Minister Hastings-Williams, who was accompanied by a team of medical personnel from within the region, spoke to the residents on the importance of having access to proper medical services. She noted that the initiative was part of the Coalition Government’s strategy to improve health services delivery in hinterland communities.

The handover delivered on a promise made to the village last year when they requested a boat and engine to facilitate transportation of patients to health facilities.

The village already has a boat and engine providing services to students in the community.

The minister also handed over sports gears to Sebai.

Over the last three years, villages including Port Kaituma, Manawarin, Assakata, Waikrebi, and Kwebanna in Region 1 have also received boats and engines for medical purposes. Water ambulances were also provided to villages in Region 10 among others.

Additionally, last week, Santa Mission, an Indigenous village in Region 3 received a boat and engine valued $2.9Million under the Ministry of Public Health’s Maternal and Child Health project. Other communities in Regions 4 and 9 also benefited from transportation under this project.