Self-sufficiency is the key to development – Min. Garrido-Lowe

Self-sufficiency was once again the watch-word as Minister within the Ministry of Indigenous Peoples’ Affairs, Valerie Garrido-Lowe visited the village of Suruma in Region 9 on Saturday.

Minister Garrido-Lowe, who is part of a massive ministerial outreach to Region 9 over the weekend, met with the Suruma residents and highlighted the tremendous efforts the Coalition Government continues to make to ensure the lives of residents are improved through self-sufficiency.

“We began with 48 farmers… and remember this was a new initiative and many at that time were sceptical that tomato ketchup could be made from those tomatoes; people would laugh at it, but the 48 stuck to it.”

From the initial 48, the minister said there are now 135 tomato farmers supplying the Paramakatoi Food Processing, Training and Research Facility in Region 8.

“This is the kind of commitment we need from our people because for the first time they are proudly producing a home-grown item and earning an income. We as a Government will continue to support them.”

Minister Garrido-Lowe also drew attention to two other successful ventures. First, the Fish and Crab processing facility in Smith Creek which, when completed, is expected to benefit not only Smith Creek but neighbouring villages. Fish and crabs will be processed for the local and international markets bringing in much-needed income for residents. Secondly, their very own Rupununi Essence Facial Line, which is also on the shelves of several businesses in Georgetown.

A very vocal resident, Loreen Jarvis praised the government for its continuous support not only for her village but the entire Indigenous population and noted that:

Minister within the Ministry of Indigenous Peoples’ Affairs, Valerie Garrido-Lowe addressing the residents of Suruma 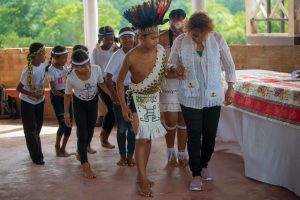 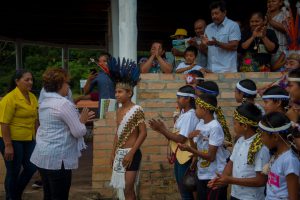 The youth of Suruma greeting Minister within the Ministry of Indigenous Peoples’ Affairs, Valerie Garrido-Lowe

The minister also reminded residents that since taking office in 2015, the Coalition Government has ensured an increase in several services including old age pension, public assistance, the number of scholarships offered to the Guyanese people.

Updating residents on the current political climate, Minister Garrido-Lowe said the December 21 vote, what many deem “the betrayal vote”, is currently engaging the courts. However, the government legitimately remains in office and will continue to execute its 2019 Budgetary allocations since this was approved and passed in the National Assembly.

Suruma Village in Region 9, over the past three and a half years, has significantly benefited from government’s support through economic and social interventions. Since 2015, the village has received $20M+ towards improving its standard of living.

More than $13M have been injected towards economic projects (Presidential Grants and other projects), while close to $10M has been invested in empowering the youth through the Hinterland Employment Youth Service (HEYS) Program.

In highlighting the villages’ achievements over the past three and a half years, Senior Councillor Abiola noted that “with the HEYS, the investment that the government has made for our young people… It proved to be a means of livelihood for them at the end of the day. I know everybody throughout the country appreciates such a programme and it is working in favour of what it was intended to.”

Minister Garrido-Lowe assured that she will bring these matters to the attention of the relevant authorities. She reiterated the government’s continued commitment to national development.

The minister is part of the 19-member delegation of government ministers and officials currently on an extensive outreach exercise in the region covering about 28 villages in three days. The outreach began on Friday, February 15 and will conclude on Sunday, February 17.