Over the last six years, the Civil Defence Commission (CDC) has been able to establish that the country’s low-lying areas, floods and droughts are disaster risks and it has taken measures to address these. 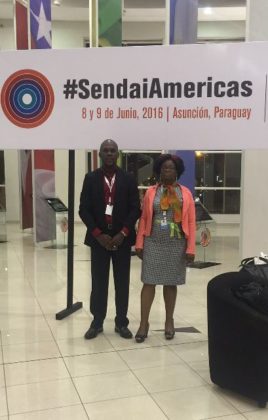 Deputy Director General of the Civil Defence Commission, Kester Craig and Senior Officer in Charge of Disaster Risk Reduction at the Ministry of Agriculture in Asuncion, Paraguay, Jean David, at the first meeting of ministers and high-level authorities on the implementation of the Sendai Framework for disaster risk reduction

The Sendai Framework was adopted in March 2015 at the Third United Nations World Conference on Disaster Risk Reduction held in Sendai, Japan. The 15-year agreement maps out a broad, people-centred approach to contribute to sustainable development and increased resilience of nations and communities by mainstreaming disaster risk reduction into state policies.

Earlier this month, ministers and high-level authorities met in Asuncion, Paraguay and produced the “Asuncion Declaration”. This document contains elements for a priority agenda and the guidelines for the development of a Regional Action Plan to serve as a basis for and expanded discussion between government and civil society in the context of the 2016 regional platform for disaster risk management.

Deputy Director General of the CDC, Kester Craig told the Government Information Agency (GINA) in a recent interview that there have also been major investments in disaster risk reduction for resilience. “When it comes to disaster preparedness and to ensure effective response, I think we have grown significantly in that area we have developed several plans we have developed a multi-hazard preparedness plan, we have flood preparedness plan, we have SOPs that look at our national emergency operation centre and also what we’re doing we’re developing regional plans.”

Additionally, he said, “There are some measures that have been taken in terms of increasing the height of sea defence structures. There are also projects such as the conservancy adaptation project that take into consideration increased rainfall.”

However, a greater understating of the country’s vulnerability is critical if action is to be taken to reduce risks in disasters, Craig noted. “We need to have better understanding in terms of where are the most vulnerable areas, where are the most vulnerable communities and take may be some decisive action in terms of how do we reduce those risks in those areas,” Craig explained. 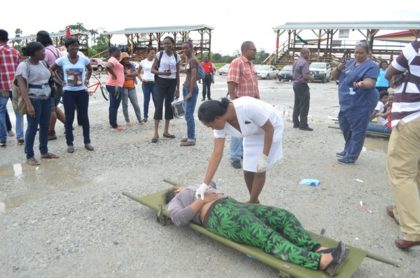 The CDC has been taking measures long before signing onto the Sendai Framework. The CDC expanded its mandate some years ago as part of strengthening its governance mechanisms said Craig. “The mere fact that we have a national platform with all the players shows that we’re also taking steps in terms of strengthening our disaster risk governance mechanism,” Craig added.

However, Craig said that more emphasis is needed in community disaster risk reduction and community preparedness response. He noted that communities are often the first to be affected in the event of a disaster; hence developing regional plans are important.

Thus far the CDC has completed regional plans for Regions Five and Six. By the end of July, it is expected to finish the plans for Regions Two and Three. “We try to work with them [Regional officials] so that they can utilise these plans and they can become more independent in terms of their response to the region,” said Craig.

The development of a regional plan enables the CDC to create risk profiles of each region which identifies the region’s vulnerability and hazards. Craig explained that the risk profiles can also be used by regional officials to inform projects within their regions.

Craig said there also needs to be more emphasis on financing for risk reduction. He added that the CDC has been receiving steady financial support from government and international agencies such as the United Nations Development Programme (UNDP) and the Inter-American Development (IDB) Bank that has enabled it to effectively implement its programmes.

However, Craig said he would like to see the wider private sector paying more consideration to disaster risk reduction. The Private Sector Commission (PSC) is a “critical member” of the Disaster Risk Reduction Platform Craig pointed out.

Incentives such as reduced interest on mortgage or higher premium on insurance should be offered to persons who are “taking action in risk reduction,” he stated.

The CDC will need to strengthen its personnel to work at the community levels, and invest more in technology especially in early warning systems and geographic information system (GIS), the CDC official stated.

The use of technology in early warning systems would ensure the “furthest community could be alerted in event that something’s going to happen” while with GIS “we will be able to now develop our own maps, our own models and able to share those maps and models with the different sectors.”