The Guyana Water Incorporated (GWI) is currently working in the hinterland regions of Regions One, Seven, Eight and Nine to increase residents’ access to potable water.

Recently, the GWI signed an agreement with the Matthews Ridge Neighbourhood Democratic Council (NDC) to refurbish two springs, and establish another well to meet the increased demand in the Region One community. 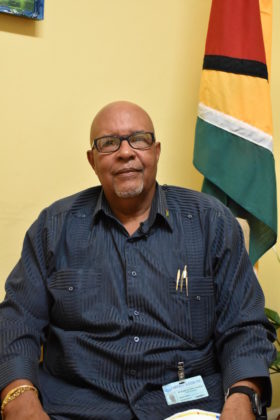 The water company’s Managing Director, Dr. Richard Van West-Charles in a recent interview with the Department of Public Information/ Government Information Agency (DPI/GINA) said that the intention is to increases access to quality water amongst the hinterland communities.

In Region Seven, contracts were awarded for the drilling of wells at Four Miles, Bartica and Tasserene. “Bartica is one of those areas in Region Seven which has only been getting water from the surface water, but what we are doing presently, we are exploring a number of ground water supplies and so we are drilling a well in Four Mile,” Dr. Van-West Charles explained.

The Managing Director said that the contractors have been experiencing some challenges, especially with regards to drilling. He said that, “It’s a challenge because you are confronting rocks, but I had a discussion with a contractor and they’re having a new rig to actually drill through the rocks.” This project is expected to be completed within six weeks.

The GWI is also partnering with the Regional Administration to install a new reservoir in Paramakatoi, Region Eight. The reservoir will capture water from the mountains, and then gravity fed to Paramatakoi and several surrounding communities.

Meanwhile, in Region Nine a number of wells are also being dug with support from the Regional Administration and the Brazilian Army. “You may remember last year the issues with respect to the impact of climate change in Region Nine, so it’s one of the regions we are looking at as a priority,” Dr. West-Charles explained.

Additionally, the water company had also been focusing heavily on providing quality water to citizens. Earlier in the year, GWI commissioned a commercial office in Lethem, Region Nine, which is equipped with a laboratory, which conducts regular testing to ensure the water, is safe for consumption. Dr. Van West-Charles said that the GWI is supporting the Ministry of Public Health interventions, to reduce water borne diseases in the hinterland communities.

The GWI has also installed over 100 filter systems in several hinterland communities, especially those that were affected by the recent floods in Region Seven and Eight. Life saver jerry cans and four large C2 filters were also provided to the communities of  Karamang, Kako and Baracara.

These initiatives are geared towards ensuring equity between the hinterland and coastal regions. GWI’s efforts has resulted in over 100,000 persons benefiting from infrastructural improvements and improved water service over the past 18 months.