Several communities in the Upper Mazaruni district (Region Seven) are gearing up to access training programmes being provided by the Board of Industrial Training (BIT).

The villages of Jawalla, Kako, Waramadong, Kamarang, and Paruima are among villages to benefit from garment construction, joinery, boat building, and commercial food preparation programmes set to commence at the end of next month.

Minister of Labour, Joseph Hamilton, M.P., along with his technical team visited these communities, which he explained, forms part of the government’s commitment to empower and educate Guyanese.

The introduction of BIT programmes in such locations, he said, will fast-track government’s plans to ensure citizens benefit from job opportunities emerging from the oil and gas industry.

The labour minister pointed out that the programmes are not gender specific, and encouraged women to take advantage of the male -dominated training programmes.

“These training programmes are not a special favour from government, but it is your right and as such, we do not want to impose any training on your village, but rather I will like to know your needs as you are in the best position to say,” Minister Hamilton said.

He told the residents that the programmes are just the beginning of what they should expect from the ministry, and within two weeks, a technical officer will return to the respective communities to finalise their work programmes.

The minister assured residents that the ministry will continue its support to ensure citizens and communities are developed.

Since 2020, BIT has provided training for over 4,000 people in the areas of small engine repairs, heavy-duty equipment operation (HDEO), electrical installation, and computer repairs. 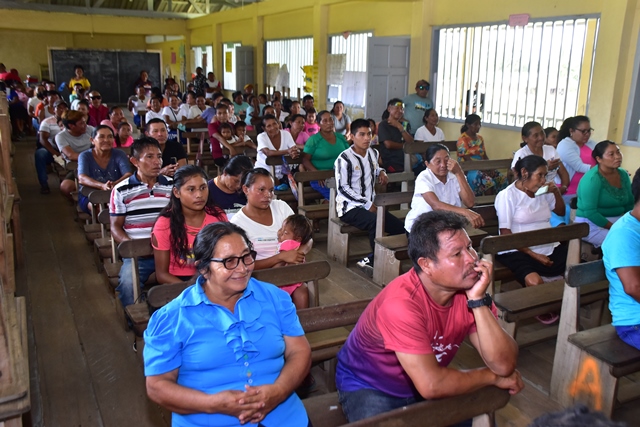 A section of the gathering at Jawalla community, Region Seven