Speaking during the inspection of the items at the wharf, Mr. Nagamootoo said that he is very thankful that the citizens have generously contributed to the efforts by Government to lend support to the Caribbean islands, which were devastated by the recent hurricanes. 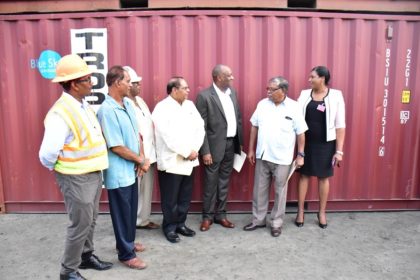 “We are committing ourselves to our brothers and sisters in the Caribbean and we hope that our modest efforts will be going towards helping some of their losses and sufferings…This is part of the continuing effort, we are not done as yet but we are hoping that other sections of the society continue to respond to the efforts being made here to help those who are affected, particularly in Antigua and Barbuda and Dominica” he said.

Minister Harmon, who echoed the sentiments of the Prime Minister, said that he too is very grateful for the outpouring of support for the affected countries. The Minister said that as of now, the items will be shipped to Antigua and Dominica for distribution to the affected islands and residents. He also expressed the Government’s gratitude to the members of the Private Sector Commission (PSC) particularly Tropical Shipping Limited, which have contributed significantly to the shipment of the relief items.

“This afternoon the containers here are going to be shipped by Tropical Shipping and that is their contribution to this effort. The costs of shipping for these containers are a donation by Tropical Shipping to the efforts of our Government and the People of Guyana to the people who are affected in Antigua and Barbuda and Dominica,” Minister Harmon said.

Meanwhile, Director General of the Civil Defence Commission (CDC), Colonel (ret’d) Chabilall Ramsarup said that the items, which are in excess of 80 tonnes of food supplies and other items, were all donations and that the CDC is grateful for them. The shipment, which is expected to arrive in Antigua within 12 days, mainly consist of pasta products, rice, water, tarpaulins and medical supplies, among other things, which were directly requested by the affected islands.

In addition to these containers of relief items, the Government of Guyana has pledged an initial sum of US$100,000 to the affected countries. 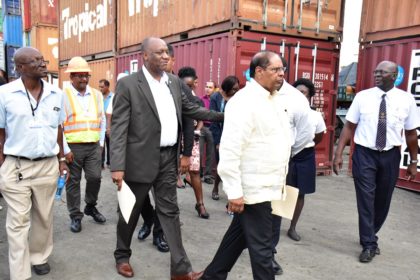 Minister of State Mr. Joseph Harmon and Prime Minister Moses Nagamootoo at the GNIC Wharf after the inspection of the containers that are destined for Antigua and Dominica.