The voting process has gone smoothly in the East Berbice Corentyne region where voting began promptly at 6:00 a.m on Elections Day.

While visiting several locations today, the DPI team spoke to several residents who were determined to exercise their voting franchise.

Regional Executive Officer (REO) of Region 6, Kim Williams-Stephen noted that it was vital for her and her family to vote at this time. 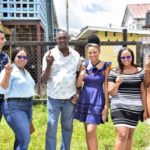 Regional Executive Officer, Region Six, Kim Williams-Stephen (second from left) along with her family after voting. 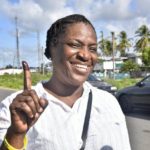 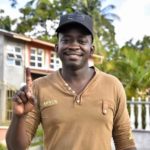 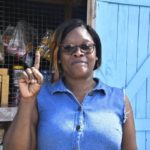 Zena Sinclair of No. 1 Corentyne.

“The atmosphere is very peaceful and there is a sense of tranquillity… the GECOM staff members were very effective,” REO noted.

Yonette Beckles, 45, of Mount Sinai cast her ballot at the Berbice Educational Institute. She believes that once citizens come out to vote, they have the right to hold the government accountable. “If you don’t vote, you can’t be in the politicians’ faces at the end of the day.”

Expressing her satisfaction with the election process, Beckles said she was amazed at the significant youth turnout. “A lot of people especially the youngsters, are coming out voting, chatting with one another. I like this,” she stated.

Second-time voter from Sandvoort, West Canje, Denzil Southwell, explained that he wanted his voice to be heard and that was why he made a special effort to vote.

“This is a very important election. This decides how far Guyana as a country, is going to excel. And I am confident because I know that my vote went to the winning party,” the local saxophonist expressed.

Deputy Mayor of New Amsterdam, Wainwright McIntosh along with his wife Shobha McIntosh voted at the New Amsterdam Secondary School.

“It is our democratic rights as Guyanese to participate in the voting process, and since local democracy would have been restored, I am overjoyed this morning to be casting my vote,” the mayor said.

Also, the DPI team visited several polling locations along the Corentyne Coast and spoke to voters. Zena Sinclair was one of them.

“I believe that the government will return to office because Guyanese are satisfied with its work. The process is very peaceful. My community hadn’t any street lights for years, so I am thankful of what Mr. Granger have done and I voted with sureness,” Sinclair confidently noted as she exited the compound of the No. 1 Primary School.