Residents of East Berbice Corentyne were lining up at polling stations from as early as 5:30 a.m Elections Day to cast their ballots.

In some communities, like those between the Number 28/Bushlot/Adventure District, residents were awoken by the sounds of horns and bells around 5:00 a.m as they were urged to get up and go vote.

About 20 persons were already waiting before the opening of polls at the Kildonan Primary School and many others entered the compound and joined the line when the polls opened promptly at 6.00 a.m. 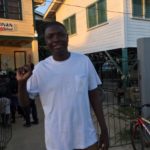 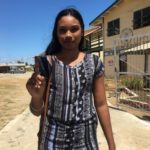 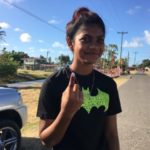 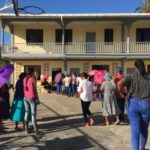 Residents of Port Mourant wait to cast their vote at the Berbice Islamic School, in Port Mourant. 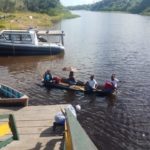 Baracara residents make their way to their respective polling stations in the Community. 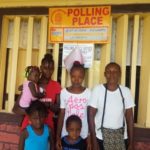 The Mantooth Family of Baracara, Berbice River, showed up to vote and even brought the children to experience the process.

The first person to cast his ballot at Kildonan was a second-time voter, Colin Moore. He expressed enthusiasm and a sense of accomplishment that he was able to be part of the democratic process to help elect the next president and government. Moore, a youth activist, is urging all Guyanese especially youths to come out early and do their part in helping to decide who has a say in governing their future.

Over at the Berbice Islamic School, first-time voter, Usha Cyril, 18, said she was nervous but excited when she held the ballot paper.

“I felt very powerful in that moment but scared at the same time; I felt I had the power right now to help elect the next government of my choice but was scared that I would mess it up by making a mistake.  But in the end, it was so easy and simple that I realised I was just worried for no reason.”

Cyril, like Moore, is calling on all youths to exercise their franchises early without any reservations.

Twenty-two-year-old Chitreka Seeram was among the first time voters who were excited to be a part of the voting process.

“I am happy I came out to do so. I expected it to be harder but it was a simple and easy process,” the Bush Lot resident said.

The people who spoke to DPI all said the voting process was simple and smooth.

Meanwhile, reports reaching DPI indicate that residents of Baracara in the Berbice River were making every effort to come out to vote. Many were seen transporting families eligible to vote by canoe earlier in the morning.

In Orealla, some 200 miles up the Corentye River, residents told DPI that the process was calm and quick.

Approximately 99,131 persons are registered to vote in Region 6, with 378 polling stations along the coastal and riverain areas. From Bush Lot to Sheet Anchor on the Corentyne, by noon persons were coming out in their numbers to vote, including the elderly, middle-aged, and first-time voters.