The Minister also advised them of the government’s plans for the development of Region Nine, including their community. 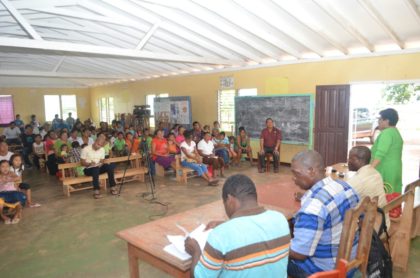 Minister Ally is one of eight senior ministers of Government who are currently in Region Nine, reaching out to residents in communities in both the North and South Rupununi.

During the engagement with the over 100 residents at the Hiawa Primary School, Minister Ally told them of Government’s plans for the development of the region and also their community. The Social Cohesion Minister stated that she is part of a Government that is working to provide the ‘good life’ to all Guyanese despite colour, class, religion or political persuasion.

Minister Ally informed the residents that President David Granger’s vision for a better Guyana is one where all the inequalities and discrimination are eliminated from society. She further stated that her Government is committed to ending ethnic discrimination.

“Our President, a man with a vision has decided that we must end this racial discrimination in order to develop this country. We want to bridge the gaps that exist because we are all Guyanese and there must be a level playing field,” Minister Ally declared. 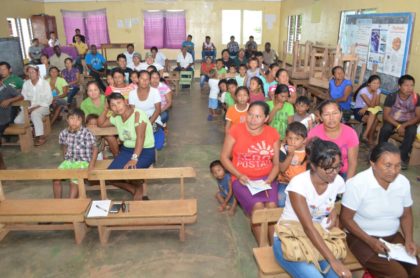 Residents of Hiawa, Region Nine at the meeting with Minister of Social Cohesion, Amna Ally

The Minister referred to the establishment of Radio Lethem 95.1 FM, which she stated is the beginning of the process of integration and bridging the gaps. She further stated that with this critical communication mechanism, “you can now be aware of what is happening in Guyana and the rest of the world.”

Minister Ally spoke of the involvement of youths in the developmental process of the communities, regions and the country and encouraged those present to get involved and be a part of the process.

“We provided bicycles to the five top students  of Region Nine as a motivation for them to continue doing good. Our Government recognises that our young people must be nurtured and developed and that is why we are giving them a boost and motivation.”

Earlier today, Minister Ally presented bicycles to the top five students of the National Grade Six Assessment (NGSA). All the students are from the Arapaima Primary School.

The Minister, in advising the residents of the government’s plans explained, “we have been doing things to bring the good life to all of you. We don’t believe in only giving you gifts, but we want to empower you.”

The Minister said she has been advised that, ” you are producing a lot of oranges and I would love to partner with the Institute of Applied Science and Technology (IAST) to develop a project where you can produce marmalade, but this is something we will have to discuss and further develop.”

The main economic activity of the over 400 residents of Hiawa is farming. Citrus crops are mainly planted, and according to the residents, the harvests of oranges  are usually thousands of  the fruit, all of which are not usually sold. It was with this in mind that Minister Ally proposed the establishment of a unit to produce marmalade – a preserve made from citrus fruit, especially bitter oranges, prepared like jam. 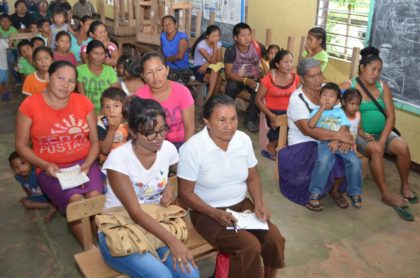 Residents of Hiawa, Region Nine at the meeting with Minister of Social Cohesion, Amna Ally

Meanwhile, during the open floor session, the residents raised several issues which include the need for furniture for the health hut,  for youths of the community to be included under the Hinterland Employment and Youth Service (HEYS)  programme, sports gear and for educational awareness programmes on social issues as teenage pregnancy which is dominant in the community.

Minister Ally committed to following up the issues raised with the relevant Government ministers in an effort to have them addressed. She undertook to provide the furniture needed for the health hut and sports gear for the youths.

When staff of the Government Information Agency (GINA) spoke with the residents, they expressed gratitude for the visit by the team and commended the Government for showing interest in their lives.

Retired Teacher and resident, Joseph Abrams  told GINA that he was very happy that Minister Ally visited and he would like to see more such these visits by  Government Ministers.

“The visit from the Minister today, was really great. It s a sign that Government is indeed interested in us and our welfare and the Government wants to see us well developed and living a better standard of life and we are very very happy for this,” Abrams said.