The Ministry of Social Protection today, launched a school football tournament at the West Demerara Secondary School, Region Three. The tournament was launched under the theme “Try walking in my shoes” and is aimed at keeping youths positively engaged during the August holiday.

The tournament is a collaborative venture among the Ministries of Social Protection, and Education, the Men’s Affairs Bureau and the West Demerara Football Association.

The tournament will run for one month beginning on Wednesday, July 13, 2016 at the West Demerara football field. Expected to participate in the tournament are 11 primary schools and 11 secondary schools. 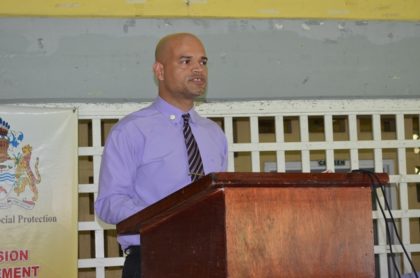 Head of the Men’s Affairs Bureau, Diego Alphonso, speaking at the launch, said he was very pleased by the initiative taken by the government towards keeping the youths occupied. Alphonso believes that sports can play a significant role in youths’ development.

“We believe the role of the sporting fraternity is important in contributing to moulding our boys and youths in general to be well rounded individuals and citizens in society,” Alphonso stated.

He said sports can help youths develop constructive traits such as discipline and offer them a sense of responsibility. He noted that society is plagued by a number of challenges such as violence and the use of drugs among youths.

However Alphonso pointed out that “we believe that this programme is symbolic in our confidence in our young men, and we would like to take this opportunity to challenge you, not only to excel in the area of sport, but to excel generally in our society and to seek to emulate role models.” 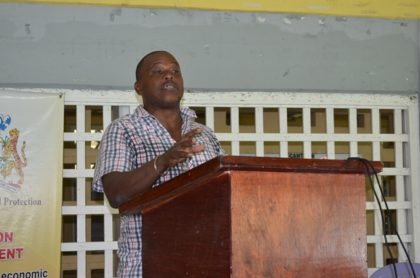 President of the West Demerara Football Association, Orin Ferrier urged the youths to apply the same determination towards the tournament as they did during their examinations.

Ferrier told the students that having discipline is very important towards anything they do. He highlighted some value lessons they can take away from the football tournament.

“You are going to learn the important quality of team work, playing with each other, supporting one another; those are qualities you can take into life.”

Some of students who will be participating in the football tournament