The farmers had made a request to the Ministry of Social Protection for farming equipment and on Sunday, Minister Ally visited both communities to make good on government’s promise. Among the items handed over are a water pump, spades, and forks.

“The President is advocating for people to go back to the land, for them to farm and the government is willing to give support to small farmers to facilitate this process,” said Minister Ally. 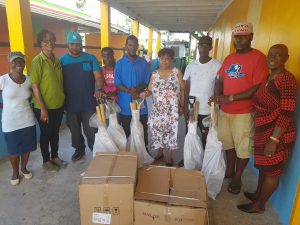 Minister of Social Protection, Ms. Amna Ally, presents a bicycle to a student from the Crabwood Creek Community

During her visit to both villages, the Social Protection Minister spoke with farmers about their challenges and possible solutions to same. The farmers expressed gratitude to the Government of Guyana for providing the much-needed equipment to them.

Meanwhile, while at Crabwood Creek, Minister Ally presented a bicycle to a student as part of the Public Education Transport Service (PETS). In 2015, President David Granger launched the PETS, which was popularly known as the Three Bs’ Initiative, to provide equal access to education for all children.

The initiative was born out of the recognition that many parents found it costly to send their children to school. To date, over 1,300 bicycles have been distributed to school children and 28 school buses and nine boats have been given to communities across the country to enable children to attend school.