The Ministry of Social Protection said it acknowledges full responsibility for last evening’s fire at the Drop-in Centre, Hadfield Street, which resulted in the death of Antonio and Joshua George, aged two and six.

The boys and three siblings were taken into state care on July 6 by the Childcare and Protection Agency (CPA), pending investigation into alleged neglect and abuse. Subsequently, the children received medical attention and medical certificates issued confirmed that the children are victims of neglect and maltreatment.

Gavin Robertson, Senior Child Protection Officer explained that on Wednesday, the agency responded to a case of neglect of a child in the Chapel and Norton Streets area where a child was missing from the home for two days.  The officers were able to speak to the mother and promised her that all efforts will be made to locate the child. Robertson said that based on the description given the child was found and returned home, where the mother and four other children were taken into the care of the CPA.

After failing to get any assistance from family members, it was decided that the children will remain in state care where they will be given psychosocial support and the agency will work to improve the mother’s circumstances.

During a press conference today, Rupert Hinds, Social Services Assistant (house father) recalled what happened. Hinds stated that he was in charge of 13 boys who were based on the lower flat of the building, since the top flat was being refurbished. About 00:05 hours; there were loud screams by the girls who are based on the upper flat, subsequently, the house mother, Sharon Jones, started to shout ‘fire, fire’. He said he then instructed the boys to exit the building. 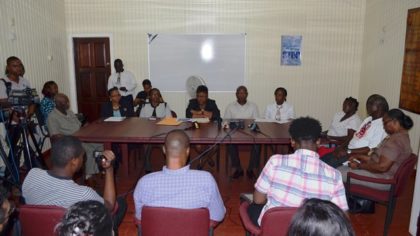 Hinds explained that the staff tried to control the blaze with the fire extinguisher, but were unsuccessful. “While on the street, my colleagues told me that the two younger boys are upstairs in the building, we tried to get back into the building but we couldn’t get up stairs because by then the entire building was engulfed in flames  …We tried to call the fire service and the Guyana Police Force, but to no avail. The fire got worse and eventually the fire service came,” Hinds said.

The Drop-in Centre was recently refurbished and a fire extinguisher installed. With advice from the Guyana Fire Service (GFS), the Centre also acquired fire blankets and a fire alarm system at a cost of $300,000. Some $15M was also spent on the refurbishing of the laundry room. A hot and cold shower system was installed, a pressure pump was set up for use; the kitchen was redone and the interior and exterior of the entire concrete and wooden structure were also repainted.

“Ironically, the handing-over ceremony for the just-renovated boys’ dorm was scheduled for today. Ironically too, a family member of the deceased brothers was also scheduled to meet with CPA officials for the five children to be placed in family-based care with support from our foster-care programme,” CPA’s Director, Ann Greene said.

In the long-term, CPA will work with the family to ensure the other three siblings, and their ailing mother, receive all the support and help they need, Greene said.

“Coming out from this incident, we will be able to learn lessons from it, and already we are beginning to think about the other homes that we have and what needs to be done right now…It was only this morning we realised that we did not have a safe place for those children in case of a fire, a flood, earthquake or any disaster and we will have to look at that,” Minister of Social Protection, Volda Lawrence said.

On the issue of inspections of the buildings, Minister Lawrence said that there is a deficiency in the government system in that area, and the administration will now have to correct it.

The GFS is still conducting investigations to determine the cause of the fire which destroyed the upper flat of the Hadfield Street Centre which housed 31 children.

The other 29 children from the Drop-in Centre are now housed at the Sophia Care Centre and the Half Way Home, located in the Care Centre’s compound and are currently receiving counselling provided by specialists from the Georgetown Public Hospital Corporation.

The Ministry extended its heart-felt sympathy to the George family and will bear the full cost of the funeral arrangements.