A ground-breaking ceremony was held on Sunday to mark the establishment of a new 1823 Demerara Slave Revolt Monument at the Independence Park (Parade Ground) – a promise kept by the Coalition Government to relocate the memorial to its “original site,” from the Atlantic Avenue.

Minister of Social Cohesion, Hon. Dr. George Norton, during his address, reflected on the dreadful history of the Demerara Martyrs back in the year 1823, where more than 200 enslaved people of African descent had met their demise horrifically.

The rebellion, which took place on August 18, 1823, was led by slaves who were reacting to poor treatment and a desire for freedom; also, there was a widespread, mistaken belief that Parliament had passed a law for emancipation, but it was being withheld by the colonial rulers. Prompted chiefly by Jack Gladstone, a slave at plantation “Success”, the rebellion also involved his father, Quamina, and other senior members of their church group. Its English pastor, John Smith, was implicated.

The largely non-violent rebellion was brutally crushed by the colonists under governor John Murray. Many slaves were killed as the insurrection was put down and another 45 men were sentenced to death, while 27 were executed.

Minister Norton said that while there is an 1823 monument already erected along the Atlantic Avenue, His Excellency, President David Granger felt it necessary to support the call by historians for the construction of the monument at this particular site.

“It was this location that bore witness to numerous gruesome public executions.  At this very site, corpses of fallen enslaved people were hung in chains. In many cases, bodies were decapitated after being hung and heads were stuck on poles, as a means of instilling fear in those who survived and remained desirous of claiming their birthright – freedom,” Minister Norton stated. 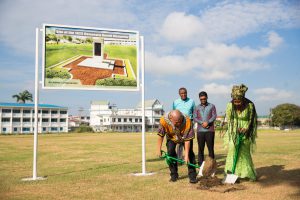 Minister of Social Cohesion, Hon. Dr. George Norton and President of the 1823 Coalition for the Parade Ground Movement, Sister Penda Guyan, turn the sod for the new 1823 Demerara Slave Revolt Monument, as His Worship Ubraj Narine and Deputy Mayor Alfred Mentore look on 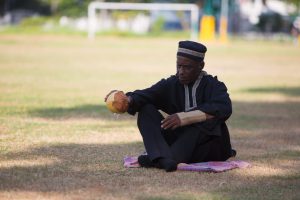 A member of the of the 1823 Coalition for the Parade Ground Movement, during the libation 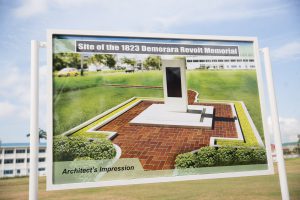 He further noted the 1823 Demerara Slave Revolt is an integral part of Guyana’s history and by extension, the Caribbean’s colonial history and it should not be buried or go unmarked. Adding that the initiating of the memorial at the location will honour the struggle of our African fore-parents and will remind us that our freedom experienced today came at an incalculable price.

“All Guyanese, are the beneficiaries of the men and women and children who resisted with arms and other daily activities. We must, therefore, value their memory and use our time wisely and constructively. I believe that young Guyanese, particularly those of African descent must see these dreadful aspects of our county’s history as a motivation to strive for greatness,” Minister Norton said to resounding applause.

Sister Penda Guyan, President of the 1823 Coalition for the Parade Ground Movement, speaking to the Department of Public Information (DPI), on the sideline of the event, expressed her appreciation to the government for responding to their call. The monument, Guyan said, was promised under the previous administration at the said site, but the plans did not materialise. It was during their tenure too; the monument was erected at the Atlantic Avenue against the objections of many persons. “We were on this ground on many occasions fighting to save it because we know it is sacred,” Guyan remarked.