Volume, tenor and melody were all tested today, as the choir and jingle segment of the Region 4 Children’s Mashramani competition swung into action.

At the primary level, Sophia Primary faced-off against Ketley Primary to contend for the winner’s title.

After two spectacular acts, ‘We Are One’ by Sophia Primary was a cut above Ketley Primary School performance and went home with the top prize. 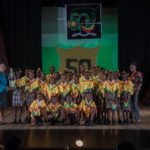 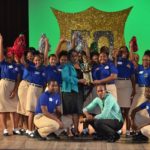 Morgan’s Learning Centre Students, and their Teacher (bottom center) bask in their accomplishment as they receive their trophy from the Department of Education’s Representative (top center). 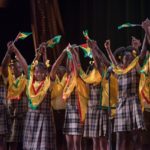 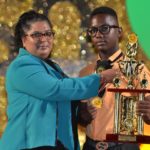 Kevis Booker receives his accolades from a representative of the Department of Education. 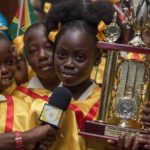 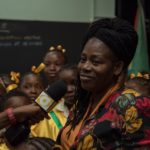 “The preparation took about two weeks. We needed more time but they [the children] were excited about it. […] We worked on our voice training, we also worked on a little movement. I talked to them about feeling the song, understanding what it is about and moving accordingly,” Elizabeth Johnson, the Music Teacher at Sophia Primary School reflected.

Ten-year-old Akeela Nurse, who bravely delivered a breath-taking solo that was part of the performance was elated with her school’s first-place win. “I feel great, but I was so shocked at the result and excited when I went on the stage,” an elated Akeela stated.

Sweet melody wafted across the stage when Morgan’s Learning Centre gave their rendition of the 1961 hit ‘Stand by Me’ by Ben E. King. Their soulful singing has many in the audience swaying and tapping their feet. They took away the first prize at the secondary level

Delivering lyrical patriotism, St. John’s College was the first runner up at the secondary level with a captivating rendition of ‘To serve my Country’ while East Rumvieldt Secondary School was awarded the second runner up with a medley of national songs.

Kevis Booker of Sophia Special School carried home the prizes in the recently added Jingle Competition for his tune which was focused on violence in school and urged parents, teachers and students to be more critical thinkers in their decision-making.

The competition, which is being held at the National Cultural Centre (NCC) continues on Thursday with secondary schools displaying masquerade dances and on Friday for the much-anticipated Physical Display and Costume contest.

This year’s Mashramani is celebrated under the theme, Guyana Together: Reflect, Celebrate, Transform.