Essequibo Islands-West Demerara continues to celebrate Education Month 2018 with lots of activities and yesterday hosted an Exposition and Fair targeting Special Needs students and teachers. The activity was held at the West Demerara Secondary School under the theme, “Embracing the Special Education Needs Paradigm in Education”.

The event saw many Special Needs children showcasing their skills from reading, listening, dancing and playing various games. The exposition was deemed a success in the eyes of many who attended. Mosses Grant, a popular educator in Region Three said, “I am delighted to be here, this shows that there is real progress in Education and equality that we so often hear of.” 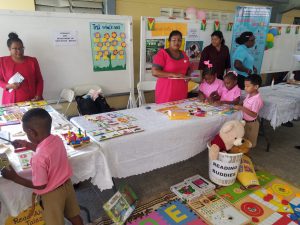 Benjamin added: “Specifically, it forms the basis in keeping with the Ministry of Education’s SEN Action Plan – Partnerships in Education as a means to encourage positive attitudes towards persons with SEN and facilitate access to educational, medical, social and other pertinent services.”

Education Officer, Devendra Persaud who spoke on behalf of the Regional Education Officer revealed that a “state-of-the-art Special Needs School was constructed at Schoonord and will soon be commissioned; there is a SEN class at Wales which will be operationalised in October and we now have a SEN unit at the Department of Education with a newly appointed SEN Officer.”

Delivering the feature address was Regional Executive Officer Denis Jaikaran who said: “The SEN Exposition and Fair will provide the avenue for teachers, parents and other members of the public to be sensitised on various categories of Special Abilities that children are gifted with. In addition, it will promote greater awareness among the public that learners with SEN can also be self-sufficient and can contribute to the country’s economy through skills development.”