Residents of Speightland, located in Mackenzie, Linden (Region 10) today, received a one- year permit to utilise a plot of land near the waterfront. The recreational area is managed by the Speightland Logging and Agriculture Cooperative Society.

The permit was handed over to the President of the Speightland Logging and Agriculture Cooperative, Kevon Lorrmier by Minister of State, Hon. Dawn Hastings-Williams during the village’s 2019 Heritage Day activity. Minister of Indigenous Peoples’ Affairs, Hon. Sydney Allicock was also at the event.

According to Lorrmier, the residents have tried to access to the land for over 23 years. He said two persons, who do not reside in the community, were claiming ownership of the land after the residents had occupied it. “I remember several times being placed in police custody because I was fighting for this playfield… under the previous administration, we made several attempts to attain ownership of the land and it was turned down and it has been more than 23 years and finally today, we are now happy to receive this permit.”

Lorrmier explained that the village has plans for the area including establishing pavilions and a community centre for the youths. The intention is to create a space where persons can express themselves and showcase their talent through sports and culture, while at the same time generating an income. 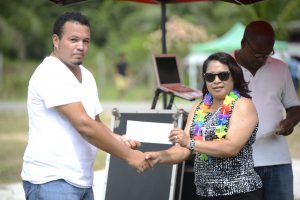 Minister of State, Hon. Dawn Hastings-Williams handing over the land permit to President of the Speightland Logging and Agriculture Cooperative, Kevon Lorrmier 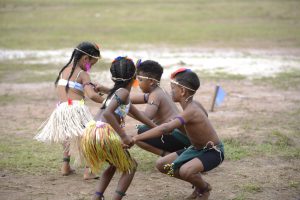 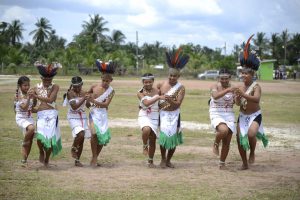 In her remarks at the Heritage activity, Minister Hastings-Williams explained that the permit will be valid for 12 months after which it can be renewed. In the interim, talks will be ongoing with the National Industrial and Commercial Investments Limited (NICIL) to provide a 20-year lease to the community for the land.

Minister Hastings-Williams said that the permit delivers on a promise made to the residents when the then Minister of State, Joseph Harmon visited the community and residents requested to utilise the land to develop a community playground.

“We [the government] believe in making things possible. We believe in ensuring that the wishes of the people are granted. That is the reason you put us in government; to serve you,” Minister Hastings-Williams told the residents.

In his remarks, Minister Allicock charged the residents to work together for the development of their community, and use the month’s celebration to reflect on how far they have come as a people.

“We have a nation to build and we can only do that if we are united. … we cannot afford to be divided at this time. Guyana is too precious. Guyana has so much that every single Guyanese can benefit.”

Speightland is located just past the old Aluminium Factory in Mackenzie. It has a population of over 100 mostly Indigenous residents.