St Vincent and the Grenadines (SVG) is seeking to formalise some of its bilateral arrangements with Guyana in terms of training in the education, agriculture and aeronautical fields.

At the CARICOM 37th Regular Conference of Heads of Government Meeting being held in Guyana, that country’s Prime Minister, Dr Ralph Gonsalves told the Government Information Agency (GINA) that his country is seeking to formalise education training arrangements with Guyana. 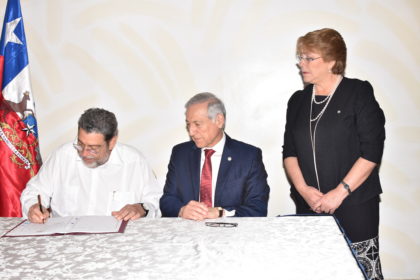 Dr. Gonsalves said that currently, aeronautical students from St Vincent are educated at Guyana’s aeronautical school. “Some come to the University of Guyana and now that we have a new vice chancellor, I hope we can formalise it even more,” Gonsalves told the Government Information Agency (GINA).

The small island state will be opening its own international airport shortly. The St Vincent Prime Minister had a bilateral meeting with Chilean president Michelle Bachelet before plenary sessions at the Pegasus Hotel in Georgetown, today.

“So I’m signing a number of air service agreements with a number of countries and Chile is one of them,” Gonsalves explained. SVG is part owner of the regional airline LIAT. Back in 2013, Gonsalves had stated he would like countries that the airline served to invest in the regional carrier. Last year, his country invested $50M into the airline whose traffic route includes Guyana.

Meanwhile, Gonsalves said his country also receives assistance from Guyana in the agriculture sector. “We’ve sent people here to be trained in agriculture and that’s where your experience can share with us and help us,” Gonsalves noted.

St Vincent and the Grenadines has offered support to Guyana especially in its border dispute with neighbouring Venezuela. Gonsalves had previously expressed that SVG and CARICOM are well placed to assist in improving relations and resolving the conflict between the two South American countries.

Guyana had first established diplomatic relations with SVG in October 1979.

The three-day CARICOM heads of government conference will come to an end on Wednesday, July 6.