The Childcare and Protection Agency (CPA) held a rally in Linden, on Wednesday, under the theme “Breaking the Silence on Child Sexual Abuse” in observance of Child Protection Week 2016. Stakeholders were charged to join the fight in eradicating child sexual abuse in Region Ten. 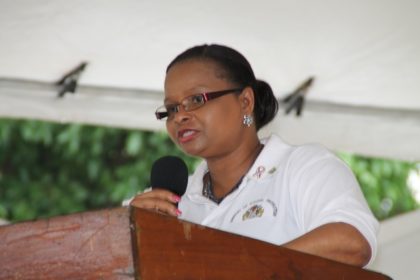 Minister Lawrence issued a call to teachers, health workers, and ranks of the Guyana Police Force to join in the fight and support the Government and Non-Governmental Organisations (NGOs) and other agencies involved in helping to raise awareness on child abuse.

Minister Lawrence told the gathering that the children in the mining town should not stay silent in the presence of child sexual abuse. “Many people stay quiet because they are weak, because they want people to know they have a partner, because they owe Courts or simply because they don’t know who to go to for help, but I say to you do not keep silent. Child sexual abuse is dangerous!” the Minister asserted.

The Minister further explained that because many persons are not bold enough or strong to report cases of child sexual abuse, this usually weakens the child who is being abused to speak out or report the abuse. 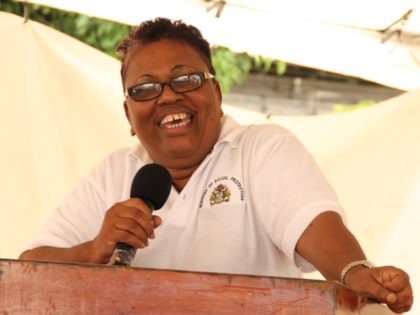 Director of the Childcare and Protection Agency, Ann Greene, delivering remarks at the Child Protection rally in Linden

Minister Lawrence revealed that investigative reports prove that there is a deafening silence on reporting child sexual abuse. “We have to leave here committed to do something, and start reporting cases of child abuse because child abuse is your problem and your problem is our problem,” the Minister contended.

Minister Lawrence highlighted that her Ministry is cognisant of the shortcomings in executing its duties and responsibilities. “We have too few officers for the large region and often times too much time is spent on following-up on old cases rather than moving ahead with the current ones,” the Social Protection Minister explained.

Therefore, efforts will be in place to strengthen officers across the country. The Ministry is already in consultations with the Director of Public Prosecutions (DPP), Chancellor of the Judiciary, and soon the Attorney General seeking to improve the level of service offered by the Ministry. “We at the Ministry of Social Protection welcome the night court and will work along with it in the best interest of our people.”

Meanwhile, Director of the CPA, Ann Greene explained that child sexual abuse is a silent problem that is ruining the lives of many children. “For many, it is difficult to talk about sex abuse and even more difficult to acknowledge that sexual abuse of children of all ages including infants happen every day.” 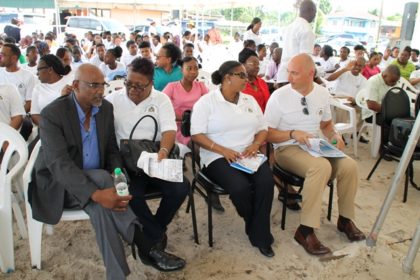 Some of the participants at the rally in Linden

Greene pointed out that child abuse is happening in all communities and is a painful experience behind closed doors. She said many children refrain from talking because “they’re afraid they won’t be believed. Some believe it is punishment for wrongdoing, some are afraid to tell because a loved one might get into trouble, and some are simply protecting the abuser,” Green explained.

However, when this happens many children are struggling emotionally and mentally. Therefore, to eradicate this barbaric act from the society, the nation must unite, Green said. Those who are knowledgeable of such acts must speak out; those children who are afraid must tell someone, and those parents who are silent need to save their children from this dreadful act, Greene urged.

Deputy Representative, UNICEF, Paola Marchi endorsed the theme of breaking the silence of child sexual abuse in Guyana. Marchi explained that the current system that addresses the issue might not be perfect, but all must work together to eradicate the act. “Breaking the silence is everybody’s business” and UNICEF is committed to working  with the necessary agencies involved to stop child sexual abuse, Marci explained.

Speaking from a religious point of view, Pastor Alfred Julien, Pandit Suresh Sugrim and Imam Dennis Muhammed all condemned the act of child sexual abuse. The religious leaders all noted that the act is atrocious and that all should play their role in eradicating this scourge from society.

The participants at the rally were entertained with songs, dances and poetry.

Child Protection Week 2016 is celebrated under the theme “Children Safety and Security our Priority”. It is observed in more than 120 countries around the world, but at different times of the year and under various themes.