Stepping stone to a good life!

Once given a chance to excel in the right environment, many persons can succeed. This is the case of 19-year-old Cowanan Samuels, a teenager who left the school system before she had completed it.

Samuels said she has been home ever since she exited school, just doing house chores and passing each day quietly. 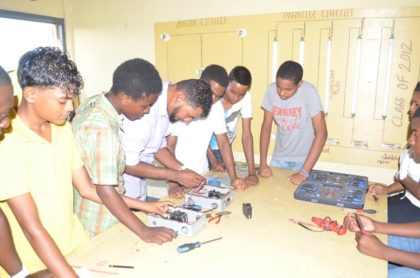 However, this all changed when she decided to something that would positively impact her life. Samuels joined the skills training programme C-PETS, Creating Positive Environments Through Safer communities and partnership.

Samuels told the Government Information Agency (GINA) that as a child she developed a passion and love for understanding how vehicles function. Hence she decided to do the six-week course offered through C-PETS. The participants graduated today.

Looking to make a change in her life, Samuels was actively engaged in the auto mechanics class. Samuels stated, that she has a particular interest in fixing cars, “not the inside parts, but like fixing the engine and putting water in the tank and oil and many other things.”

But Samuels is not the only one who is taking advantage of C-PETS. With hands on training, 24 – year old Uriah Fraser who was a participant in the electrical engineering course told GINA that he is now able to fix electrical problems in his home whenever they occur. 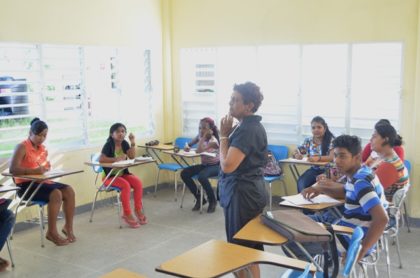 English A Lecturer, Bibi Salima Dashrath looking at participants’ work during a session

According to another course participant, 18-year-old Aaron Vasquez, “It has been a good experience to learn.”

On Tuesday, 71 youths graduated from the C-PETS skills training programme. Commissioner of Police (ag) David Ramnarine congratulated them for achieving such a great accomplishment, and encouraged them to never give up on their dreams no matter the circumstances.

The Commissioner pointed out that they have a whole host of avenues to venture into with job opportunities now more accessible.

The Guyana Police Force’s ‘D’ Division Commander, Steven Mansell was instrumental in the creation of the C-PETS programme which begun in June 2015, in Region Three. Commander Mansell told GINA that before the programme came into existence, he saw many young people in the region just idling. 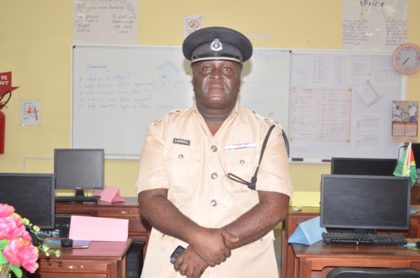 The commander explained that it was then he decided that something needed to be done to keep the youths meaningfully occupied, while creating the foundation for them to acquire jobs.

“The idea came to my self and some faith based leaders one afternoon at Leonora police station compound that we needed to engage the youths during the school holidays that is July, August early September and I said to them I will be approaching the technical institute’s director, and I met with the principal Eon Nicholson and he quickly consented,” the Commander explained.

The programme offered training in carpentry, electrical engineering, welding, metal work, auto mechanic, information technology, Mathematics and English at the Leonora Technical and Vocational Institute. Age is not a factor as the youngest child in the programme was a 14-year- old while the oldest person was 30 years old.

The institute’s principal Nicholson said that the programme is competency based, and it allowed youths to demonstrate their skills and not just sit in a classroom and take notes. 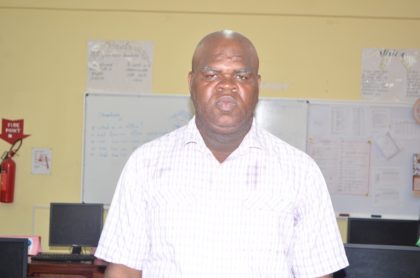 Principal of the Leonora Technical and Vocational Institute, Eon Nicholson

The principal stated that, “When they go out to the world of work, the employers will know that these people have the capability and ability to do the work.”

Last year, it was found that it was costly for youths travelling from those far flung areas and this resulted in drop-outs. However, this year, the Ministry of Education and the police provided transportation for the participants of the programme. Principal Nicholson pointed out that by doing so; there was a significant increase in the number of youths participating.

English ‘A’ teacher, Bibi Salima Dashrath said that the students were very receptive, a sentiment also shared by Sesnaraine Persaud who lectures in Electrical Engineering.

Both Commander Mansell and Principal Nicholson have observed a positive change in the youths. Additionally, both said that many are off the streets and there has been a reduction in the crime level in the region. This is an added boost for residents of the Essequibo Islands-West Demerara Region.

“We have had a number of youths on the streets in West Demerara, today, we are not seeing youths liming because they are meaningfully engaged,” the Commander said. 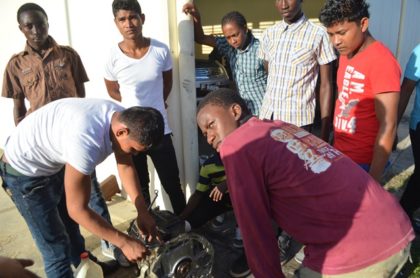 Some of the youths actively engaging in the Auto Mechanic class

The youths now have the option to undertake a one-year programme being offered by the institute. This is an offer that many youths have taken without hesitation.

Kevin Allen who teaches the welding course has been encouraging the youths to continue their training. Due to the nature of the courses offered, Allen said that it is common to find that mostly males would gravitate towards this field.

Allen said, “When they see measurement, tools that we use to get jobs done, they get excited so they want more and they are even telling me they want to come to the school permanently.”

One such participant who is considering taking up the course is Rabindra Susankar. Susankar is also employed with a local company in the region.

Due to the course being competency based, the youths are exposed to practical training sessions. According to the institute’s Principal, having the youths take part in the practical training was an initiative of the Ministry of Education. Principal Nicholson pointed out that the Education Ministry allows for their vehicles to be fixed by the participants.

However, the programme is not only benefitting out of school and unemployed youths, but also those who are in the regular school system. Fifteen-year-old Rehanna Cadogan who attends the Leonora Secondary school said that she decided to participate in the course because she will be entering into the Business Stream when she returns to school and wanted to have a crash course into Office Administration.