The Social Services Parliamentary Sectoral Committee on Thursday visited the New Amsterdam Regional Hospital, Regional Six to examine the functions and management of the healthcare facility.

Members of the committee found that drug shortages at the health institution remain a sore issue. However, Director of Health Services in the region Jevaughn Stephens revealed that these issues are the result of the suppliers routinely delivering important and much needed drugs  late. 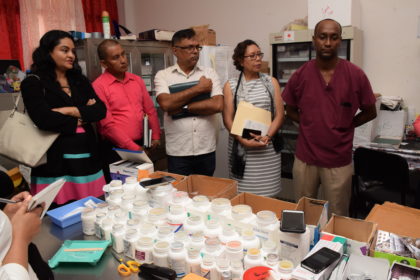 Chairperson of the Social Services Committee Dr. Vindhya Persaud explained that the continued shortage forces the regional hospital to purchase drugs from the emergency funds but there still is not enough provision to meet the demand.

“There have been instances where drug shortages were raised by patients notably in chronic non- communicable diseases like diabetes and hypertension, as well as other medication for thyroids and other areas. What we have noticed is that there seems to be some difficulty between the demand or supply and procurement and sometimes it is, that the hospital may have inadequate (amounts) to supply the outpatients; they just have for inpatients or they would not have received sufficient medication from MMU,” Dr Persaud said.

During Thursday’s visit, members of the committee, as well as staff of the hospital recorded that some drugs were delivered to the facility.

The Chairperson had noted that the system of transferring drugs from the Materials Management Unit (MMU) to the health facility leaves loopholes for discrepancies hence the shortages. The Minister within the Ministry of Public Health, Dr. Karen Cummings said that the ministry is aware of these issues and is in the process of addressing them.

Minister Cummings said, “The Ministry of (Public) Health is working to bridge the gap that exists in all essential areas. The ministry was engaged with some of their international partners like (Pan American Health Organisation) PAHO… we do have a problem with suppliers because they are saying suppliers don’t have the quantity or the name of the drug so we are engaged with our international partners to ensure that we have these drugs.”

Meanwhile, during the tour of the healthcare facility, the need for additional staff in administrative and technical areas was recorded, more 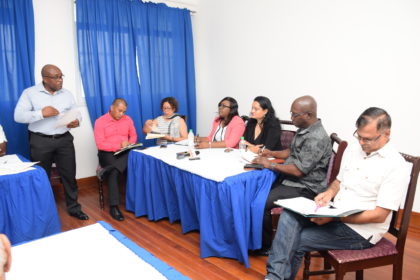 specifically the need for porters and Medical Laboratory Technologists. Dr. Persaud also recommended that accommodation facilities and allowances for ‘on call’ doctors should be restructured to encourage the workforce to deliver optimum services.

The Minister assured that, “the delivery of best quality healthcare services regardless of the challenges remain a priority. Not because of challenges, we are going to compromise our healthcare and so we want to encourage our young doctors and the senior personnel there to give of their best and to have pride as they dedicate their services with unquestionable professionalism.”

The Parliamentary Committee on Social Services exercises the responsibility to examine all policies and administration for each sector, to determine whether the execution of Government policy is in agreement with the principles of good governance, and in the best interest of the nation.

“The way this committee functions, we will prepare a report based on what we would’ve encountered today in person, and also we will wait for some additional information based on what they have, and other areas. We will now write to the same hospital and make the recommendations. One of the things this committee also has the ability to do is to summon the Minister of Health or any minister for that matter, if that ministry falls within our purview to give reasons as to why there are shortages or why there is anything.”