Ten indigenous village leaders are undergoing training in Georgetown, to serve as welfare officers in Regions One, Seven, Eight and Nine. These officers were recently hired by the Ministry of Indigenous Peoples’ Affairs and will assist in addressing social issues affecting the country’s first people.

The workshop is aimed at assisting the officers to better understand their roles, responsibility and procedures they will have to follow when addressing social and welfare cases.

The plan is to establish a corps of welfare officers to be stationed across the hinterland to provide the necessary services. These individuals will also provide the ministry with information regarding the needs of the communities.

At the launch today, at the Hinterland Student Dormitory at Liliendaal, Minister of Indigenous Peoples’ Affairs, Sydney Allicock stressed the importance of ensuring hinterland residents are cognisant of their rights and are aware of all the services available to them. 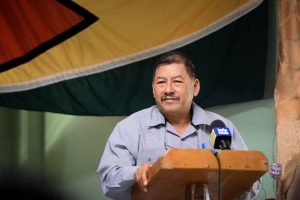 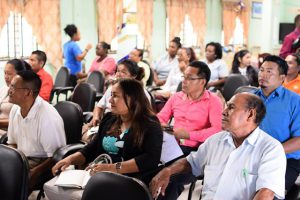 Some of the participants undergoing the training exercise 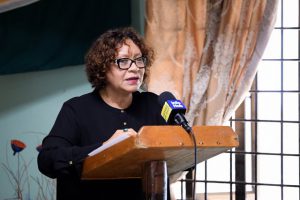 Minister Allicock noted that the event is timely, as it coincides with the recently concluded National Toshaos Council (NTC) where a number of social and welfare issues were raised.

“You are part of the solution to many of those issues that we have been hearing, issues affecting our people…the people need to be properly informed, they need to be part of this whole process and you …will have to be in a good position to give that advice, to give that guidance and to impart knowledge. That is why it is necessary to receive all the training possible,” Minister Allicock told the participants.

Minister within the Ministry of Indigenous Peoples’ Affairs, Valerie Garrido-Lowe, who also has responsibility for welfare services, noted that the initiative is part of the government’s vision of bridging the gap between the hinterland and the coastland.

Minister Garrido-Lowe explained that when the administration took office in 2015, it found that only one welfare officer was stationed at each region; to date, this number has significantly increased. However, the minister noted that it is still not enough to serve all the villages, hence the need to train additional officers.

“While we may train welfare officers in every aspect, when they are placed in these communities they don’t understand the language and the people’s tradition, so we thought it best to bring persons directly from each region who are au fait with the culture and languages.”

The one-month training exercise is being facilitated by the ministry in collaboration with the Ministries of Social Protection, Public Health, Citizenship and Public Security, among other agencies.