Eighteen Officers drawn from Units across the Force have commenced training on the Senior Command and Staff Course (SCSC) Number 14, which will prepare them for Senior Leadership.

The course which commenced on June 27 2016, will at the end make the Officers competent to function in Senior Command and Staff appointments within the Force.

The 12-week course will touch on a number of areas including Minor Staff Duties, Communication Skills, Open and Close Country Warfare, Administration and Logistics, Military Law and History and Environmental Studies.

The Senior Command and Staff Course is conducted by the Force to meet the training and professional military educational requirements of Officers.  The Force utilises the learning experiences garnered from its Directing Staff and Senior Officers who attended Staff Colleges in Canada, China, India, Brazil and the USA.

Chief of Staff Brigadier General, Mark Phillips officially declared the course open at the Jaguar Lecture Hall, Base Camp Stephenson, on Wednesday July 6, 2016. He told the Officers that the course was designed to prepare them for command and staff work and prepare them generally for senior military leadership in an increasingly complex defense and security environment

He urged them to pay attention to the curriculum and immerse themselves in the course reading material. “Be an active participant in group assignments and approach all assignments with a positive attitude since the training modules will be delivered in an objective manner,” he urged.

Brigadier Phillips noted that governments today require their militaries to help them manage natural disasters and to deal with complex emergencies. As such, he said, the missions of Military Forces are therefore now more dynamic than ever.

He stated that the Command responsibilities of the Force flows from the Defence Act and therefore, the education of the Force’s Officers must result in a higher level of understanding of the concepts of operation and the strategic issues of importance to Guyana’s Defence and Security at the national, regional and hemispheric levels.

As such , he stated that the course is designed to improve the knowledge base of Officers and to help them become better leader of character and competence. “ We expect you to maximise the use of this opportunity,” he told the Officers. 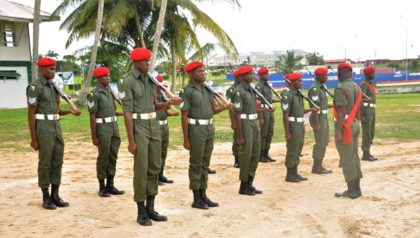 Some of the Aspirants in a Quarter Guard