Sunday, January 12, 2020. – Georgetown, Guyana: Three more villages in North Rupununi can look forward to upgraded water systems and improved access to potable water in the near future, following assurance by the Guyana Water Inc that provisions will be made to drill new wells and install distribution networks.

Those villages are Apoteri, Rewa and Crashwater, which are accessible by a combination of land and water or air and water. On Thursday, January 9, 2020, GWI officials, led by Managing Director Dr. Richard Van West-Charles, journeyed to the villages to assess their  current water and sanitation situations. The team spent a total of 5 hours travelling on the Lethem trail and another 5 hours on the Rupununi River, to reach the villages and return to the town of Lethem. 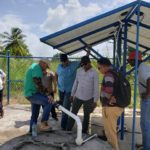 Dr. Van West-Charles and other GWI officials assess a water system in Apoteri. 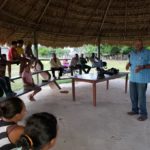 While in Apoteri, the farthest village among the three, GWI officials learnt that only villagers residing close to the existing water system are benefitting from it, while those who live farther depend on hand dug wells.

Toshao of Apoteri, Mr. Kenny Thomas indicated that the water in the wells go low during the dry season.

Similar situations exist in the other two villages.

Toshao of Rewa, Mr. Rudolph Edwards noted that during the rainy season, the hand dug wells become contaminated and contribute to water borne diseases such as diarrhea.

Dr. Van West-Charles explained that with new technology, GWI will see to it that potable water is supplied to their homes. He enlightened them of the 22 wells that GWI drilled in 2019 and the commissioning of water supply systems in Sand Creek, Moco Moco, Kaicumbay, Yupukari and St. Ignatius.

He stated that GWI has taken note of the difficulties they have experienced in accessing water during the dry season in 2016/2017 and the company has since moved to drill wells that can withstand the seasons and produce water all year long.

The Managing Director  informed the residents that government has approved funding for the purchase of a rig that will drill through rocks to access water, which he says will make a significant difference in the quality of water provided.

Additionally, he alluded to the new technology GWI has acquired to treat surface water, in instances where groundwater is unavailable.

Responding to concerns about persons living some distance from central locations of the communities, Dr. Van West-Charles said trestles will be constructed to serve different clusters of houses within villages.