The Guyanese Canadian community in the Greater Toronto Area marked Guyana’s 50th Republic Anniversary with the hoisting of the Golden Arrowhead, and an Interfaith Service at the Scarborough Civic Centre in Toronto, Canada. Led by Ms. Anyin Choo, Consul General of the Cooperative Republic of Guyana in Toronto, this occasion was the first of a series of events planned to commemorate Guyana’s Republic Golden Jubilee in 2020. 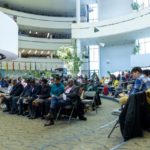 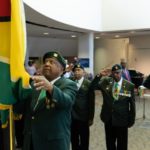 Veterans of the Guyana Defence Force hoisting the Golden Arrowhead at the Toronto Republic Day flag raising and interfaith ceremony. 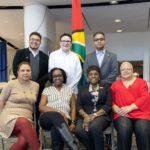 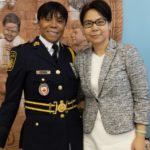 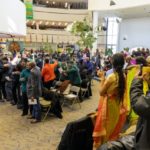 Section of the Toronto Republic Day flag raising and interfaith ceremony’s attendees offering one another a sign of greeting and peace.

The ceremony featured remarks and prayers by Guyanese faith leaders of the Christian, Hindu, and Muslim communities. The audience was called on by these religious leaders to come together in national unity to celebrate Guyana and support its development. Well wishes were extended to the Guyanese nation in the diaspora by Councillor Jim Karygiannis on behalf of the City of Toronto, and Councillor Ashmeed Khan on behalf of the Town of Ajax. Sentiments calling for unity and celebration were echoed by the Consul General of Guyana to Toronto, Ms. Anyin Choo, who called on Guyanese to remain unified as the country experiences a paradigm shift in socio-economic development with the dawning of the petroleum sector, and in light of the proceedings before the International Court of Justice regarding the nation’s territorial integrity. The Consul General urged the diaspora to remain engaged and invested in Guyana’s future.

Amidst an enlivened atmosphere, the Golden Arrowhead was raised by veterans of the Guyana Defence Force, and those gathered were led in the singing of national songs by a Guyanese Canadian choir.

The Planning Committee and the Consulate took the opportunity once more to invite members, allies and friends of the Guyanese community in Canada to join in the marking of this auspicious occasion by way of their attendance, partnerships and support for the remaining scheduled events which are planned for in the coming month. These include:
1) GUYTALK (Guyana-Talk) on Sustainable Development in the Oil and Gas Era, which is held in partnership with the University of Toronto on March 28, 2020 at the George Ignatieff Theatre, University of Toronto; and
2) Republic Golden Jubilee Concert (includes a Cocktail Reception, Cultural Showcase and Awards Ceremony) on March 29, 2020 at the P.C. Ho Theatre.

The Planning Committee also strongly encouraged the public to submit nominees for consideration as recipients of the Republic Golden Jubilee Awards of Recognition.