Toshaos call for stiffer penalties on illegal and unsafe mining

Toshaos and other village leaders are calling on the government to enforce stricter penalties on illegal miners and those engaging in unsafe mining practices.

The Toshaos were at the time raising several issues with Minister of Natural Resources, Hon. Raphael Trotman at the 13th National Tohaos Council (NTC) Conference at the Arthur Chung Conference Centre.

Some of the Indigenous leaders attending the 13th National Tohaos Council (NTC) Conference at the Arthur Chung Conference Centre (ACCC).

Chenapou’s Toshao, Edward Mc Garrell raised the issue of mining operations that are contaminating the waterways. He explained that an elderly resident, Mamai Lucille Williams, was displaced as a miner wanted to excavate her land.

Responding to the situation, Minster Trotman assured that Williams will be compensated and placed in a comfortable environment.

“I am going to personally visit later this month to see what is happening with her condition and to see that the issue is resolved,” he said.

The Guyana Geology and Mines Commission (GGMC) is also prepared to assist.

Another Toshao took the opportunity at the conference to raise his issue with the hope of having it addressed. Toshao Mario Hastings, of Kako Village, stated that the water in the Upper Mazaruni is contaminated. He explained that this issue has been ongoing for years and called for the situation to be addressed by the ministry and GGMC.

Meanwhile, Kit James of the South Rupununi commended the ministry for being very helpful when addressing some of the issues in the mining sector. He expressed concerns regarding miners’ heavy-duty vehicles destroying the roadways in the village of Aishalton. The miners would pass through Aishalton on their way to the Marudi mining area.

Toshao of Kwebanna and Vice-chairman of the National Toshaos Council, Paul Pierre called for a final resolution of the Chinese Landing issues that have been ongoing for decades.

Minister Trotman noted the matters raised and assured that it will be addressed.

The 13th National Toshaos’ Council Conference began earlier this week and will conclude on Friday. The leaders of the over 212 Indigenous villages, in all of the 10 Administrative Regions, meet annually at the important forum to have engagements with the president and government ministers, and officials from various government agencies. It is aimed at consolidating and expanding the national development and transformation processes to cater to the needs of Indigenous people. It also addresses issues such as land titles and demarcations, education, health, social services, security and infrastructure. 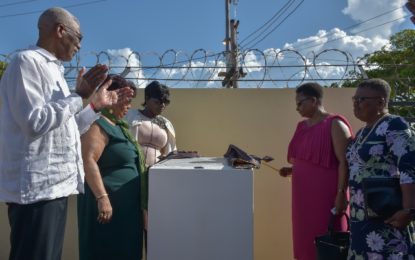