The training of trainers programme for the Hinterland Employment and Youth Service (HEYS) project commenced on Monday in three regions; Two, Seven and Eight. 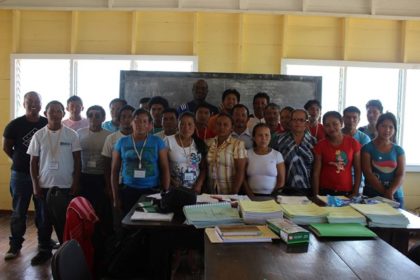 Participants at the ‘Train the Trainer’ programme, Kato, Region Eight

Minister within the Ministry of Indigenous Peoples’ Affairs, Valerie Garrido-Lowe, attended the first session which saw 18 trainers from five villages converge in Kato Village in Region Eight for the week-long training.

Representatives from two other villages, Kanapang and Kaibarupai were unable to attend due to difficulties encountered because of the inclement weather. However, they were expected to join the training on Tuesday.

Meanwhile, Minister Garrido-Lowe urged participants to ensure youths from their communities capitalise on the opportunity being afforded them by the Government.

“We want to see the opportunities that are gained by the people on the coast that you also get these opportunities, because it takes people to build a nation…people have to have the skills to build a nation. What is the vision for the youths of your community? You have to have a plan first and what this programme will do for you is to help to give you the skills to build this community, to make it a progressive one, to start bringing income into the community, income into the youths’ pockets,” the minister emphasised.

Job creation, Minister Garrido-Lowe stressed is vital. “That means we have to create a business that we can run and make a profit and we can employ, so in turn we create jobs for people, we can do that,” said the Minister.

Commendations were showered on the few successful indigenous business entrepreneurs. The minister encouraged other interested businesses to work to make their ventures successful.