Today marks three years since President David Granger was sworn in, and the Coalition government began its journey to transform the nation. 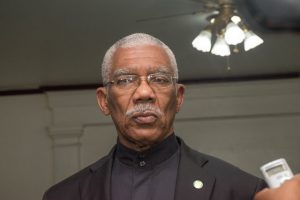 H.E. David Granger, President of the Cooperative Republic of Guyana

President Granger speaking on the sidelines of an event this morning at State House explained that Guyana’s transformation is a daily process. He stated, “We have made tremendous progress for the first time in living memory, since Independence. We have a situation in International relations where the border controversy is going to the court. We have worked very hard for it and I give credit to our Foreign Minister Carl Greenidge and the team of advisors”.

Among the numerous transformations are the salary increases for public servants and upgrades in all areas of public service provided to citizens.

The Head-of-State did note however that there are some challenges including suppression of piracy and issues with within the prison service. The President, however, reiterated that the government is steadfast on track to addressing these matters. He said, “These are challenges that are not of our making but we are working very hard to overcome them we have sought the advice and assistance of our partners overseas and we are very confident in the fullness of time we will deliver to the Guyanese citizens what we promise them a better, safer life and more prosperous country.”

The President added that he does not envision there will be any major additions to the cabinet with regards to new Ministries. The Head of State is confident that Guyana and its people will continue to strive for the “good life”, in the coming years.