UG’s School of Medicine to be re-accredited by November

A team from the Caribbean Accreditation Authority for Education in Medicine and other Health Professions (CAAM-HP) is set to visit Guyana, as part of a move to restore accreditation to the medical school at the University of Guyana (UG).

“The team is arriving, and we are anticipating that at the end of November, the team will complete it works,” Minister of Education Dr Rupert Roopnaraine told the National Assembly last evening, just moments prior to the House committing a significant $109.683M to support the re-accreditation endeavour. This effort is also aimed at producing 1,600 graduates to support Guyana’s development.

“…it is very important that we get the accreditation and all its details right…,” the Minister said. He explained that the supplemental covers the cost associated with the visiting team which will have no less than six persons. Included are international travel, accommodation, meals, international transportation and subsistence. 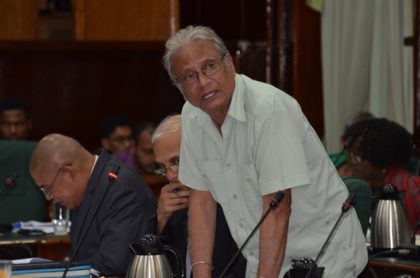 Minister of Education, Dr. Rupert Roopnaraine addressing the issue of UG’s re-accreditation during the National Assembly

Also included in the cost are several measures that the university is obliged to fund and completed prior to the November 2016 re-accreditation. These include provision of critical office supplies required by the School of Medicine at a total cost of $1.575M; the maintenance/upgrade of classroom and laboratories for programmes being delivered by the School of Medicine to the tune of $18.758M, and $89.350M for the expansion of student and staff research and development, which is mandatory for all universities and colleges globally.

The UG School of Medicine lost accreditation, in July 2015, following the institution’s delay in submitting a report on the school’s progress to CAAM-HP, the accrediting body for medical, veterinary, and dental schools in the 15 -member nations of the Caribbean Community (CARICOM).

The school of medicine lost accreditation after the authority found that some of the issues that it had highlighted on one of its earlier visits to the school were not addressed. These included infrastructural improvements; a review of curriculum; and the signing of a Memorandum of Understanding (MoU) among the Ministry of Public Health, UG’s School of Medicine, and the Georgetown Public Hospital Corporation (GPHC) for funding of the school.

The regional body also grants temporary accreditation under certain conditions to medical schools in the Caribbean. The UG School of Medicine was granted short-term accreditation for the periods 2008 to 2009; 2009 to 2012; and 2013 to 2015. These were followed by visits by the authority in 2012 and 2013.