─ ‘This is historic’ – Min. Trotman

After securing clearance from both the Environmental Protection Agency (EPA) and Guyana Geology and Mines Commission (GGMC), Guyana Goldfields Incorporated, owner of Aurora Gold Mines has begun what is being described as successful underground explorations at its north-west Mazaruni location.

Following a tour of the mine earlier on August 27, Senior Vice-President, Strategy and Corporate Affairs, Perry Holloway told the Department of Public Information (DPI), that the EPA’s clearance gives the company up to 2,500 metres of underground exploration, plus test mining for 300,000 tons of ore. “We have started and have gone down a couple of hundred meters; maybe three or four hundred metres right now. Everything so far is going great, the rocks are cool, some people thought it would be hot, there is very little water, some people thought there would be a lot of water as we are very close to the Cuyuni River, none of that is true.” 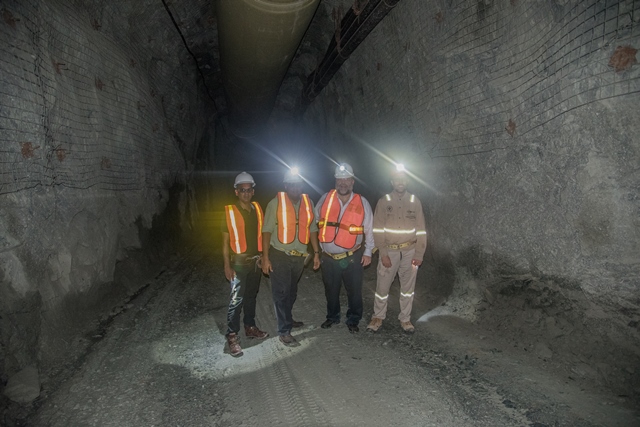 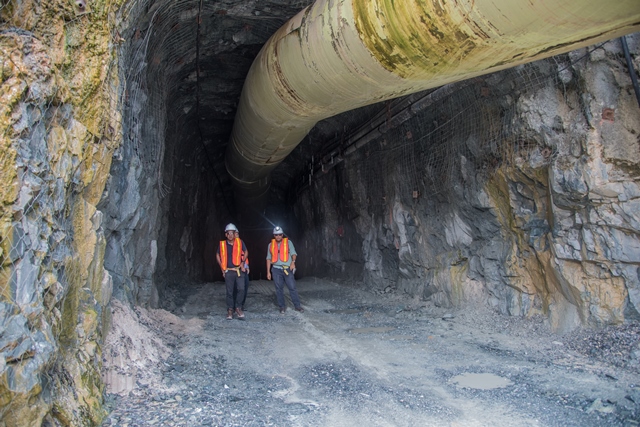 Minister of Natural Resources, Hon. Raphael Trotman makes his way out of the underground tunnel at AGM where exploration is currently taking place.

Holloway said side drilling would begin soon to determine where and how much gold was at the location.

Minister of Natural Resources, Hon. Raphael Trotman, during the tour, said he was happy with the current progress reports from the company. He had previously visited the camp with a South African delegation back in March this year before exploration began.

“This is historic for Guyana. We have had underground mining in Guyana before, I’m not saying this is the first, but certainly it is the only company doing it right now,” Minister Trotman stated.

Adding that this was a great opportunity for Guyanese to see and understand the functions of an underground mine.

The Natural Resources Minister also stated that he was especially pleased to know that the company got its exploration clearance from both the GGMC and EPA.

“I’m happy to see that issues and some challenges with GGMC and EPA have been resolved and the company has been able to start the exploratory aspect of the digging and hopefully things progressed and a full mining permit will be given by both the GGMC and EPA,” he said.

Aurora Gold Mines is one of the largest gold mines in Guyana and the world, with an estimated reserve of 6.54 million ounces of gold.

With respect to the underground mining exploration, $5Billion (US$25M) is expected from the first three years of exploration.