Five (5) members of a Damage and Loss Assessment (DaLA) Team arrived in Guyana over a week ago to closely observe and report on the economic impact of the May-June 2021 National Flood. The team, organised by the United Nations Economic Commission for Latin America and the Caribbean (ECLAC), was engaged in earlier discussions with the Government of Guyana to communicate goals, expectations and finalise plans for the mission.

On August 12, 2021 the sectors of focus and methodology of the assessment were presented to various Government Ministers and agreed upon. The methodology will aim to capture the macro-economic assessment of damage, losses and additional costs which resulted from the disaster. These will be particularly focused on the agriculture, mining, tourism, manufacturing, industry and commerce, education, and infrastructure sectors. It is important to note that the DaLA is part of the Damage Assessment and Needs Analysis (DANA) Continuum that is done after the hazard or disaster impacts have occurred and is meant to examine the macro-economic impact. Consultations with various technical agencies and government ministries are ongoing. The Environmental Protection Agency (EPA), Protected Areas Commission (PAC), Iwokrama, Guyana Revenue Authority (GRA), National Agricultural Research and Extension Institute (NAREI), Guyana Water Incorporated (GWI), and the Guyana Livestock and Development Association (GLDA) are providing technical assistance during the DaLA assessment; while Regional Democratic Councils (RDCs), the Ministry of Agriculture (MoA), Ministry of Finance (MoF), Ministry of Education (MoE), and the Ministry of Public Works (MoPW) are supporting the mission with a myriad of relevant resources. 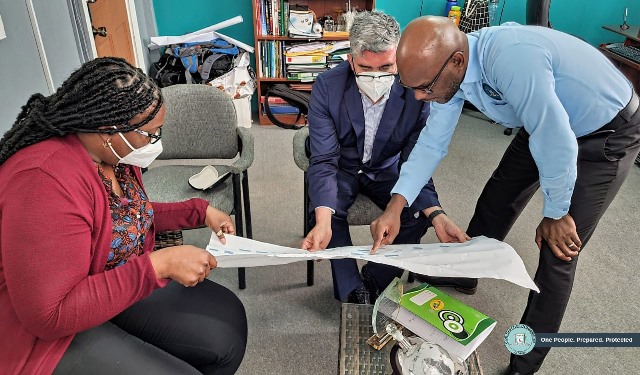 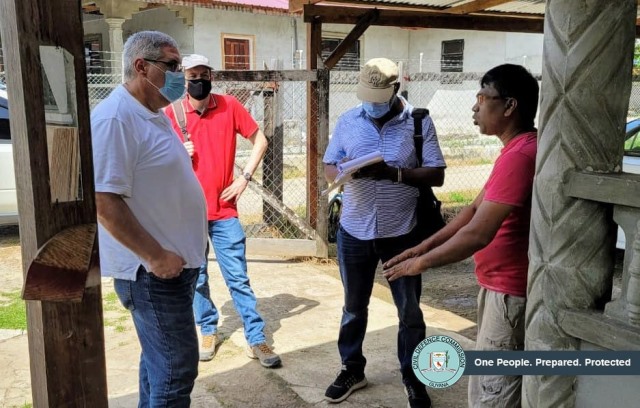 Members of the team speaking with a Region 7 resident on Day 3.

The group was led by Mr. Omar Bello, the DaLA Coordinator, and also consisted of Mr. Francisco Ibarra, a Mining Analyst; Mr. Michael Hendrickson, an Economy and Finance Analyst; Mr. Francis Jones, a Statistician, Population Affairs and Public Policy Expert; and Mr. Carlos Espiga, an Infrastructure Analyst. Additionally, the DaLA entourage was accompanied and guided by Civil Defence Commission (CDC) personnel; representatives of the Guyana Livestock and Development Authority; Guyana Geology and Mines Commission; National Agricultural Research and Extension Institute; Ministry of Public Works; and Regional Authorities throughout their visits. Their first deployment on September 6 sent them to Mahaica-Berbice (Region 5). There, they assessed farms along the Abary River and the sea defence at Dantzig/Fairfield, along Guyana’s coastland. On day two (2) the team traveled to Upper Takutu-Upper Essequibo (Region 9) and observed farmlands and communities in the town of Lethem and the village of Sand Creek. Day three (3) took the group to Cuyuni-Mazaruni (Region 7) where they examined mining operations along the Issano to Olive Creek communities, as well as communities in the lower and middle sectors of the Mazaruni River. The team then traveled to Upper Demerara-Berbice (Region 10) on day four (4) where they observed impact in the Kwakwani, Aroraima, Hururu, Ladernsville and Lamp Island areas, as well as a shelter managed by the CDC. On the final day, the group visited East Berbice-Corentyne (Region 6), specifically Black Bush Polder and Port Mourant. There they assessed farmlands and commercial communities. Before the team’s country departure, the DaLA Coordinator met with the Director General of the Civil Defence Commission, Lieutenant Colonel Kester Craig, to update on the progress made with the assessment. Mr. Bello indicated that he learned a lot about the significant impacts of this year’s flood and would submit the team’s report within the stipulated deadline. Colonel Craig thanked the DaLA Coordinator for his group’s hard work and expressed anticipation for the comprehensive report due subsequently. 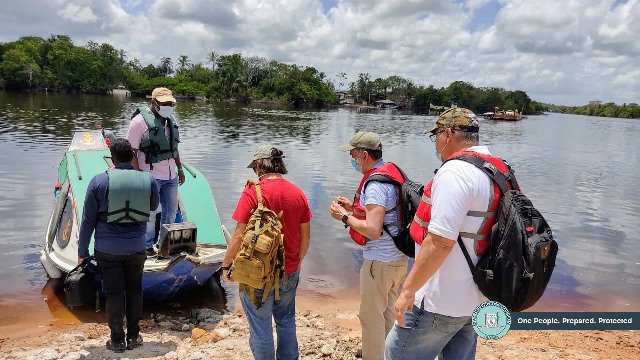 The team preparing to travel on the Kwakwani Waterfront on Day 4. 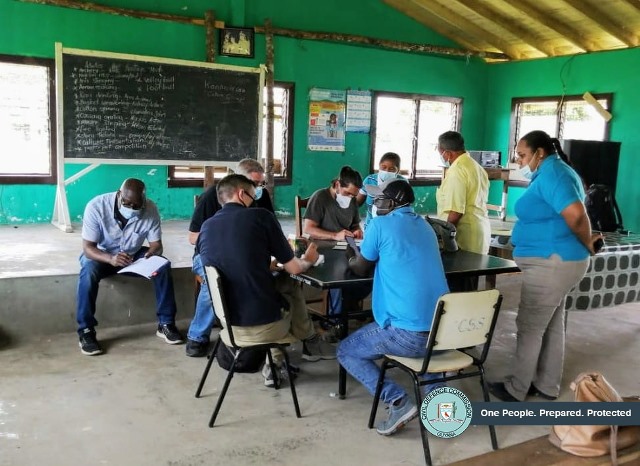 The team meeting with Region 9 representatives on Day 2. 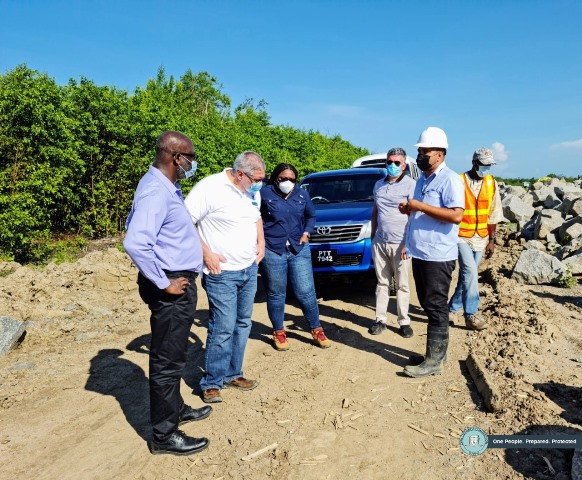 The team meeting with Region 5 Sea Defence Authorities at Dantzig/Fairfield on Day 1.

Previously, a Detailed Damage Sectoral Assessment (DDSA) was conducted months prior by a team discharged by the Caribbean Disaster Emergency Management Agency (CDEMA) during the final stages of the May-June 2021 National Flood. The DDSA, which is also part of the DANA continuum, is an assessment that is distinctive from the DaLA as it is usually done during the response and early recovery stages of the hazard impact with specific geographical and sectoral focus. The DDSA reports are currently being reviewed by the CDC and other relevant technical agencies, and can be referenced as baseline data for the DaLA. 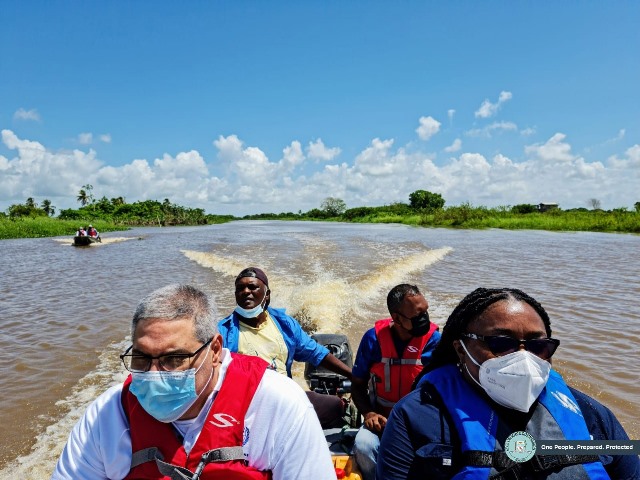 The DaLA Team moving along the Abary River in Region 5 on Day 1. 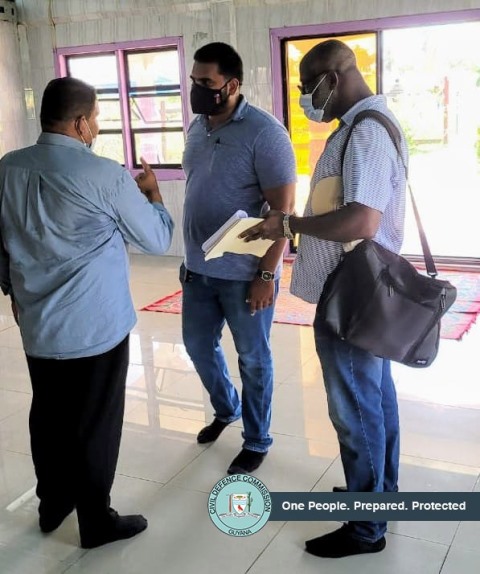 A DaLA Team member meeting with Region 6 officials in Port Mourant on Day 5.

The Government of Guyana and the CDC are seeking technical support from several entities to evaluate the risks from hazards and disasters in Guyana, while formulating and implementing plans to manage those risks.