The Guyana/Venezuela border controversy started during the second half of the nineteenth century, between Venezuela and Great Britain over the location of the border between its colony of British Guiana and the Spanish-speaking country.

This continued until an Arbitral Tribunal was empanelled in 1897 to determine the borders and issued an Arbitral Award on October 3, 1899. 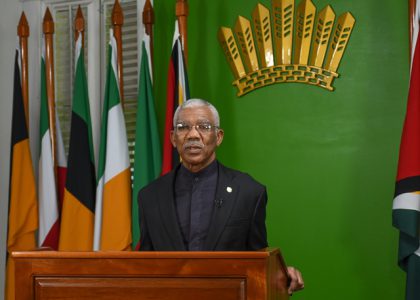 President David Granger during his address to the nation.

Following this, a Joint Commission with representatives from both countries delineated the borders in 1905. For half a century, Venezuela honoured this Agreement in word and deed.

Venezuela’s Minister of Foreign Affairs, Esteban Gil Borges in 1941 agreed that the frontier with British Guiana was well defined and was a closed issue.

However, in 1962, Venezuela, unilaterally and without any basis or evidence, announced that it regarded the Award of 1899 as null and void.

By November 1965, a meeting in London between Venezuelan and British representatives and a representative from British Guiana was held. A joint Communique stating that both sides should work to “find satisfactory solutions for a practical settlement of the controversy which has arisen as a result of the Venezuelan contention” was issued.

The Ankoko Incursion took place in 1966 when an armed group of Venezuelan soldiers, along with civilians, encroached upon and occupied territory on the Guyana side of the island of Ankoko at the confluence of the boundary rivers Cuyuni and Wenamu. It took the form of the introduction of military and civilian personnel and the establishment of an airstrip and the erection of other installations and structures including a post office, school and military and police outposts.

In February of 1966, the governments of British Guiana, Great Britain, and Venezuela, in Geneva, Switzerland signed an agreement by which a bilateral commission was appointed to seek “satisfactory solutions for the practical settlement of the controversy between Venezuela and the United Kingdom which has arisen as the result of the Venezuelan contention that the arbitral award of 1899 about the frontier between British Guiana and Venezuela is null and void.”

The Mixed Commission was unable to fulfil its mandate largely because Venezuela declined to deal with the question of its contention of the nullity of the 1899 Award.

The Geneva Agreement does not state or imply that there is a territorial controversy between the countries or that there is a matter where the border between the two countries is unsettled. What it recognises and seeks to resolve is the Venezuelan contention that the Award of 1899 is null and void.

Venezuela, however, has worked feverishly over the years at turning the controversy about its contention of invalidity of the Arbitral Award into a dispute about territory.

Venezuelan atrocities over the years have included, but are not limited to, the unjustified killing of a Guyanese citizen by Venezuelan armed forces in 2006; the apprehension of a vessel conducting seismic studies in Guyana’s Exclusive Economic Zone (EEZ) by the Venezuelan navy; protests to and threats against companies involved in economic partnership with the Government of Guyana; and the mobilization of military troops along the border with Guyana.

The actions were despite the treaty obligations, juridical delimitation, acceptance of the Award, the fact that Venezuela acted in accordance with it for nearly 63 years and the existence of the Good Offices Process.

Both Guyana and Venezuela in 1982, requested the United Nations Secretary-General to decide on a method of solution to the controversy.

The Secretary-General chose the Good Offices process in 1990.

However, in 2012, after careful consideration, the Government of Guyana had taken the decision to review its options within and consistent with the Geneva Agreement as it did not appear that Venezuela was willing to meet its obligations under the Process.

By 2014, the UN Good Offices process was declared exhausted by Guyana.

Venezuela has consistently embarked on a pattern of subversion, threats, and intimidation.

Venezuelan President Nicolas Maduro in May 2015 issued a decree, No. 1787 laying an illegal claim to almost all of Guyana’s maritime zone.

In September 2015, there was an escalation of Venezuelan military activity in eastern Venezuela near to the border with Guyana.

The Government of Guyana had strongly denounced this decree calling it a flagrant violation of international law and inconsistent with the principle that all states should respect the sovereignty and territorial integrity of other states. Guyana further rejected the illegality of the decree which sought to undermine Guyana’s efforts at development through the exploitation of natural resources offshore.

In July 2015, Venezuela issued a second decree, 1859 reiterating its claim. By September that same year, Venezuelan gunboats and troops were deployed along Guyana’s borders.

President David Granger has been relentless in his efforts to ensure that a juridical settlement of the decades-old controversy, lobbying Guyana’s case on international platforms.

In his maiden address at the 70th Session of the United Nations General Assembly, September 29, 2015, President Granger told world leaders, “Guyana rejects the threats and claims by Venezuela which are in defiance of international law. Guyana resists Venezuela’s acts of aggression in defiance of the Charter of the United Nations which prescribes the peaceful settlement of disputes and proscribes the use of armed force. Guyana’s border with Venezuela was settled 116 years ago. The whole world, except the Bolivarian Republic of Venezuela, accepts our borders. Guyana does not wish that this obnoxious territorial claim should obscure the prospects of peace and obstruct the possibility of growth for the next fifty years. We need a permanent solution in order to avoid the fate of perpetual peril and penury. Guyana seeks a juridical settlement to this controversy”.

On December 15, 2016, the former UN Secretary-General, Ban Ki-Moon, informed the Presidents of Guyana and Venezuela, of his decision under Article IV (2) of the 1966 Geneva Agreement as to the means of settlement of the controversy between Guyana and Venezuela.

Secretary-General Ban informed that the Good Offices Process will continue for one final year, until December 31, 2017, with a strengthened mandate of mediation.

It was stated that if by the end of 2017, Secretary-General António Guterres concludes that significant progress has not been made toward arriving at a full agreement for the solution of the controversy, he will refer the matter to the International Court of Justice (ICJ) for juridical settlement.

President Granger met with the UN Good Officer in April 2017.

On January 30, 2018, UN Secretary-General Guterres referred the matter to the ICJ for juridical settlement.

Following this historic announcement, the Government of the Cooperative Republic of Guyana welcomed the decision.

President Granger, in a special address to the nation, said that “Guyana remains confident in the correctness of its case and anticipates the reaffirmation of the validity of the 1899 Arbitral Award before the International Court of Justice.”

The Head of State reminded that Guyana’s position has always been that the basis of the controversy is a legal question, which should be resolved peacefully and conclusively through a legal process.

The President assured that Guyana will take the necessary steps to ensure that its national patrimony will be protected and remains committed to the peaceful settlement of disputes, respect for international agreements and treaties and to maintaining friendly relations with its neighbours.

The Head of State reiterated that “Guyana will pursue the path ahead in furtherance of the preservation of its sovereignty and territorial integrity with quiet confidence and with the assurance in ever improving relations with its neighbours, Brazil, Suriname and Venezuela”.