The Minister within the Ministry of Communities Dawn Hastings-Williams and team including representative from the Blossom Incorporated, Tiffany Griffith conducted an education outreach to several communities in the Upper Region Seven. 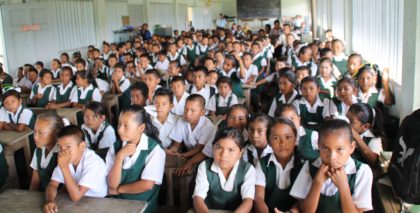 Students at the meeting at the Jawalla primary school, Region Seven

The aim of the exercise was to raise awareness about child abuse and the strong role the community plays in intervention and prevention. This was part of activities in observance of Child Protection Week, September 18 to 24.

For three days (September 21-23,) the Minister and team, held engagements with the children, parents, community leaders and councillors  of Kamarang, Jawalla, Kako and, Kwebanna on child rights, preventing child abuse and better parenting. This was reinforced by a travelling exhibition, titled, “Break the Silence, Stop Child Sexual Abuse” which the team shared with them.

Speaking at the different engagements, Minister Hastings-Williams sought to reinforce the importance of community involvement in ensuring the protection of the nation’s children. 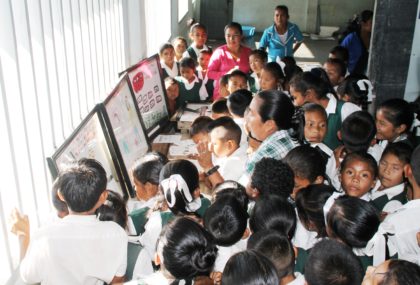 The Minister noted that, “Child abuse is real.” Moreover, incidents of child abuse are on the increase throughout the 10 administrative regions, with the hinterland regions showing signs of more vulnerability.

The Minister noted that “all (parents, community leaders, businesses and the police) must become involved,” to stop this scourge and called on the community leaders, parents and residents to put prominence on the issues, by making it a topic of discussion at every forum.

The Minister urged that the community make it a decisive issue at the weekly village meetings and at the level of the different Parent Teachers’ Association meetings. The Minister also asked that these meetings discuss such issues as how to recognise the signs and symptoms of abuse and what to do if it is suspected that a child or young person has been harmed. 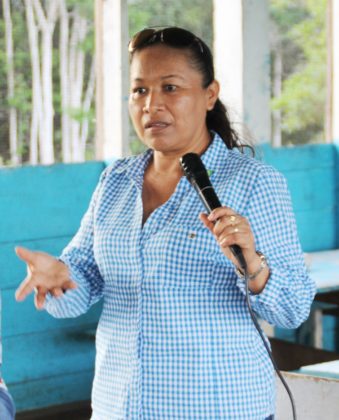 The Minister not only urged further education, but for the community to seek to report instances of suspected abuse.

Meanwhile Griffith reminded the children that they are all special and, “You are going to be the leaders of tomorrow’s generation…” Griffith explained that their parents, community and government have a responsibility to them in relation to ensuring that they become their best self for their future role.

Griffith pointed out  that the responsibility also includes ensuring that they are “well taken care of” including from all forms of abuse.

“Abuse is any form of punishment or wrong doing that has been done to a child,” Griffith  explained to the children and, “if somebody beats you and leaves marks on your skin and causes you pain and you are not able to  attend school that is abuse. If somebody should touch you on your private parts, that is abuse.”

The Blossom Incorporated representative urged the children to report all instances of abuse, to “somebody who you think you can tell and who would not cause you more harm.”

During the meetings, Minister Hastings-Williams also spoke briefly on the issue of Indigenous Heritage, and Education Month, both of which are also being observed in September. 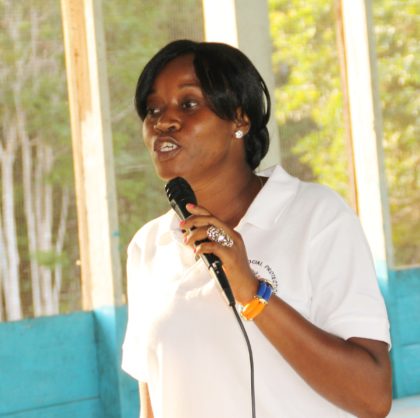 In addressing these two celebrations, the Minister reiterated the government’s commitment to indigenous development, including that  it pledged to work to bring access to, and the quality of education offered in the hinterland on par with what is offered on the coast land.

“The government is committed in ensuring that every child has access to quality education despite their geographical location,” the Minister assured.

The Minister also resolved to bring to Cabinet’s attention a number of issues and  concerns that were raised during the engagements including improving the living quarters of government workers in the hinterland.

The Child Care and Protection Agency (CCPA) stated that over 2,238 cases  of child abuse have been reported.

According to Director of the CCPA, Ann Greene, the most reported cases of abuse are neglect, followed by sexual abuse.

Blossom Incorporated is a registered non-governmental organisation, within Guyana, that works separately and in collaboration with the Ministry of Social Protection, to build and strengthen children and families’ relationships, and to safeguard the physical and mental well-being of all children.

Minister within the Ministry of Communities Dawn Hastings-Williams interacting with two parents in Kwebanna, Region Seven

Residents at the meeting in Kwebanna 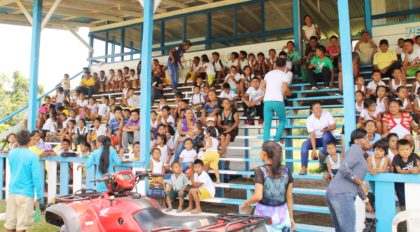 Residents at the meeting in Kako