The donation comes on the heels of a Subject Matter Expert Exchange (SMEE) which the Florida Army National Guard conducted with personnel of the Guyana Defence Force on March 7, 8 and 9, 2016. Those sessions were aimed at helping the Guyana Defence Force to develop a tactical programme that applies to military operations, concerning suicide prevention and Force resilience.

The Material which was handed over today includes Training Standards, Leaders’ Guide to Suicide Prevention and a number of pamphlets and information on Warning Signs and Risk Factors of Suicide.

Captain Hill, during the simple handing over ceremony this morning explained that the gesture stems from the SMEE which was designed out of a desire to assist the GDF in dealing with the issue of Suicide, which has become a social ill in the society. “So during that training there was a lot of new material and suicide is a big issue and we wanted to expand on what was learnt during those sessions,” he stated. He pointed out that assisting in building suicide prevention capacity in Guyana is a priority of the current United States Ambassador, Perry Holloway. “So the Ambassador intends to do as much as possible to aid in suicide prevention”.

Force Welfare Officer, Captain Deon Heyligar who accepted the material on behalf of the GDF, expressed appreciation for the timely gesture and pointed to the importance of the information received. “This information will go a far way in helping us to boost the
knowledge of our soldiers,” she stated. She acknowledged the good relationship between the US and GDF particularly as it relates to information sharing from a welfare perspective. 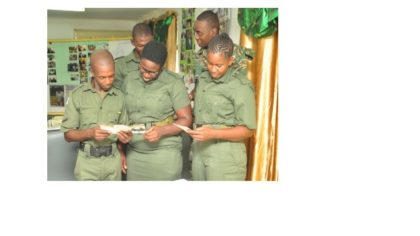 A few soldiers were on hand for the handing over and Lance Corporal Andel Douglas registered his eagerness to read and learn from the information which he believes will empower him to recognize certain tendencies and be able to render assistance from his level.

The Guyana Defence Force Effective Suicide Prevention requires everyone in the Unit to be aware of the risk factors for Suicide and know how to respond; Commanders, Non Commissioned Officers and Supervisors all play an integral part in this regard.